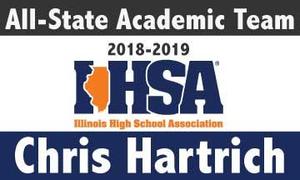 The MCHS Athletic Office proudly announces Christopher Hartrich is one of only 26 high school students in the state of Illinois to be named to the prestigious IHSA All-State Academic Team. Chris was chosen from hundreds of Illinois high school seniors who were nominated based on their academic and athletic accomplishments.

The Illinois High School Association (IHSA) announced the 26 students who have been selected to the 2018-19 All-State Academic Team sponsored by Caterpillar. This award was established to honor high school students exemplify teamwork in competition as well as excel in the classroom. The 13 male and 13 female honorees of the IHSA’s top academic honor were chosen from hundreds of students throughout the state.

Every IHSA member school was invited to nominate one female student and one male student. Nominees needed to possess a minimum 3.50-grade point average on 4.0 scale after their 7th semester, have participated in at least two IHSA sponsored sports or activities during each of the last two years and demonstrated outstanding citizenship.

The nominations were evaluated by a committee made up of IHSA principals, representatives of the Illinois Activities Directors Association and representatives of the Illinois Athletic Directors Association. One male winner and one female winner from each of the seven IHSA Board of Directors Divisions were selected initially, while the final 12 spots on the team were then rounded out with at-large candidates from anywhere in the state.-IHSA.org