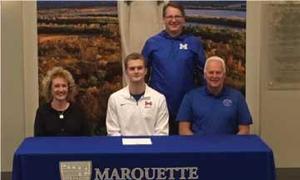 Student-athlete Nick Hemann has signed his Letter of Intent to continue his soccer career as a Maryville Saint. Nick Hemann signed his Letter of Intent to play soccer next season at Maryville University in Missouri.  He has been accepted into the 5 year Masters Program to study Business Administration with an emphasis in Sports Management.
The boys soccer team ended their season with a 14-3-4 record. At the end of the 2018 season, Nick received a unanimous vote from the IHSA coaches to be named the All-State Goalie for Illinois.  During his 3-year varsity high school career, Hemann garnered 32 shutouts and was the winning goalie for the 2017 State Champion team.
He continues to contribute to the Explorers' athletic program.  He's currently experiencing great success on the basketball court, helping the Explorers win the MELHS Turkey Day Tournament for the third year in a row, as well as, being named Tournament MVP.