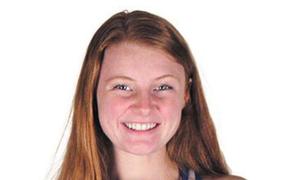 The seniors competed at the IHSA state tournament in suburban Chicago. Macias and Wendle were the only Riverbend players at the event.

“State was awesome, especially since me and Maria got to go,” Macias said. “We met up there and we got to hang out, and that was fun.”

A day before the state tournament began on Oct. 18, Wendle and Macias had dinner with their coaches and family members at Weber Grill Restaurant in Schaumburg.

“It was awesome,” Wendle said.

Both players also turned in outstanding seasons this fall. Macias, Alton’s No. 1 singles player, finished 30-18 and helped the Redbirds finish 13-4-1 in dual action. Wendle also played No. 1 singles at Marquette and went 15-5.

Macias was the first Alton player since Janelle Wilson in ‘14 to compete at state.

“Getting a win was awesome,” Macias said. “It’s always great to go up there and go to Chicago and have a good experience. Just to win a match is really cool.”

Wendle was the seventh Marquette player in nine years to play in suburban Chicago.

“It was so much fun,” Wendle said. “I’ve never been to state before, so it’s the best way to end my senior year.”

Macias and Wendle played each other twice and Macias won both times, including a come-from-behind, three-set victory in a first-round match of the Robert Logan Invitational Tournament.

“We had some really good volleys that went back and forth,” Wendle said of Macias. “It was really fun playing against her because I felt like I was learning something from her whenever I played with her.”

Macias placed fourth in the Belleville East Sectional to earn her first trip to state. She clinched a state berth by beating Springfield’s Maya Hoffman in the quarterfinals at Kings Point. She was then congratulated by her teammates.

“My team has always been supportive,” Macias said. “It meant a lot to me and a lot to them to go to state. When I finally made it, it’s just awesome. The whole team was super excited for me.”

Wendle finished second in the Triad Sectional. She beat Jersey’s Holli Roberts in the quarterfinals to clinch her first state berth.

“I’m definitely going to miss playing high school tennis,” Macias said. “My dad (head coach Jesse Macias) is the most upset. He’s been coaching me for so long.”

Wendle competed at Marquette all four years. Her sister, Jane, played at AHS and her brother, Peter, was a member of the Marquette boys squad.

“I decided to go with the family tradition in playing tennis because it’s always super fun,” Wendle said. “I never thought it would bring me to where I am today.”