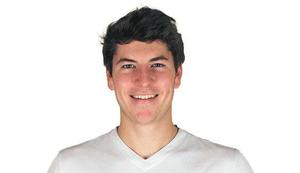 Chris Hartrich has seen a lot of success in his four years as a varsity soccer player, and he arguably left his best for last.

Hartrich, a forward, was an all-state selection by the Illinois High School Soccer Coaches Association (IHSSCA) this year after being selected to the all-sectional team as a junior.

“Personally I knew (this season) was going to be a challenge,” he said. “After coming off last year when I missed half the season to mono, I wanted to show that I could come back and maintain my high level of play.”

Hartrich did just that, scoring 19 goals and 14 assists. He finishes his career with 61 goals, 57 assists, and 11 game-winning goals. He had double-digit goals and assists in each of his four seasons at Marquette.

This season, he joined teammates Nick Hemann (goalie) and Stephen Hasse (midfielder) as an all-state selection. Hasse was a club soccer player who decided to play for the Explorers after some convincing from Hartrich. It was Hasse’s first season as a prep player.

“I invited him to one of Marquette’s open gym events over the summer, and (Steven) loved it, he wanted to participate in the school and we wanted to have him,” Hartrich said. “He was a good asset on the field.”

The on-field bond between the two friends was immediate.

“We have been friends our whole lives, so that chemistry showed right away on the field,” he said. “It was good just to get out and show people what we could do.”

The duo was charged with following up on Marquette’s 2017 Class 1A state championship team, with the added challenge of being bumped to 2A for this year. Together, they made it their personal mission to make sure Marquette soccer maintained its reputation in the higher class.

“Even though we play a lot harder schedule than other 1A schools just because we are independent, we still wanted to show people and other teams that just because we won 1A doesn’t mean that we were a pushover in 2A,” he said. “No matter what, we wanted to make sure that we do the best for Marquette; that is the chip on our shoulder.”

Marquette finished 16-3-4 and advanced to the Class 2A Civic Memorial Regional finals against Columbia, where they lost 3-2. Hartrich said it was disappointing not to go back to the state final but is satisfied with what he and his team were able to accomplish.

“You don’t expect to beat every team, but you do want to do your best every game and take it one game at a time, and that’s what we did this year,” he said.

Along the way, Hartrich had some big games, including a 4-goal performance against Belleville West, but none more so than their Sept. 28 tilt against crosstown rival Alton.

“Besides the rivalry, it was the best game on the best field with the fan base going crazy, under the lights; it was great,” Hartrich recalled. “The game went our way, too.”

Marquette won that game 5-0, thanks in part to a goal by Hartrich and three assists by Hasse.

For as much success as Hartrich had playing soccer, he has chosen to call it a career and focus instead on academics.

“I’m not considering my soccer career, but I am hoping to go to a Division I school for academics,” he said. “It’s very hard to juggle everything, so I just want to take it one thing at a time.”