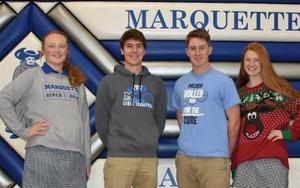 Gracie Piar’s freshman season with the Marquette Catholic girls golf team got off to a sizzling start Aug. 14 at the Madison County Tournament at the Legacy Golf Course.

“It’s great,” Piar said. “I didn’t think it was possible for a freshman.”

Piar’s season took off from there. She was the Explorers’ top golfer with a 39.7 average and helped the Alton school win a regional championship and place fifth in the Class A state tournament at Red Tail Run Golf Course in Decatur.

“I liked it a lot because it’s my first year, and I know I have many more years to try to get to state and win regionals again,” the freshman said. Chris Hartrich has seen a lot of success in his four years as a varsity soccer player, and he arguably left his best for last.

Hartrich, a forward, was an all-state selection by the Illinois High School Soccer Coaches Association (IHSSCA) this year after being selected to the all-sectional team as a junior.

“Personally I knew (this season) was going to be a challenge,” he said. “After coming off last year when I missed half the season to mono, I wanted to show that I could come back and maintain my high level of play.”

Hartrich did just that, scoring 19 goals and 14 assists. He finishes his career with 61 goals, 57 assists, and 11 game-winning goals. He had double-digit goals and assists in each of his four seasons at Marquette.

Riverbend Boys Golfer of the Year

Golf may not have swept Marquette senior Sam Cogan off his feet, but the player and the sport do have a love affair.

Cogan went from the No. 6 golfer on varsity as a freshman to No. 2 as a senior and the last Explorer standing at the Class 2A state tournament. The long-hitting senior finished in a tie for 12th at Weibring Golf Course in Normal on Oct. 13, wrapping up his career on a high note.

The success of his senior season has given him a new perspective on golf.

“Some of my teammates over the years thought with a little more practice I could play college golf,” Cogan said. “I told them, ‘You’re crazy, I don’t want to play golf. I’m playing baseball.’ But now that I’ve gotten better, progressed and had motivation to practice, I’m thinking golf is for me. In the course of the last year, I’ve grown to like golf a lot more.”

Playing with guys golfing in college like Michael Holtz, Nick Messinger and Jack Patterson helped prepare him for this season. The seniors competed at the IHSA state tournament in suburban Chicago. Macias and Wendle were the only Riverbend players at the event.

Wendle was the seventh Marquette player in nine years to play in suburban Chicago.

Wendle competed at Marquette all four years. Her sister, Jane, played at AHS and her brother, Peter, was a member of the Marquette boys squad.

“I decided to go with the family tradition in playing tennis because it’s always super fun,” Wendle said. “I never thought it would bring me to where I am today.”

Riverbend Fall Coaches of the Year

Burchett enjoyed another strong season as Marquette boys soccer coach this fall as he coached the Explorers to a 16-3-4 record.

He now has 33 victories in two seasons as Marquette coach. Last year, he coached the Alton school to a Class 1A state championship in his first season.

The Explorers went undefeated in their first 17 matches, going 13-0-4 before losing to Clayton in the finals of the CYC tournament on Sept. 29. Moving to Class 2A in 2018, they couldn’t make another trip to state, falling to Columbia in the Civic Memorial Regional finals.

Burchett’s team had plenty of weapons, including seniors Chris Hartrich, Stephen Hasse and Nick Hemann. Hartrich and Haase each scored 19 goals and Hemann had 57 saves in goal. All three of them were named to the all-state team,

Geisler’s second season with the Marquette Explorers saw them advance to a Class 2A sectional and qualify an individual linkster to state for the second time.

The Explorers finished second at the Jacksonville Regional, carding a 323 as a team to advance to the Carbondale Sectional where they placed ninth, ending their season as a team.

Senior Sam Cogan was the lone Marquette boys golfer to advance to state, where he finished tied for 12th place with a 77 after the tournament was cut to one day due to snow.

During the season the Explorers enjoyed a repeat performance as small-school division Madison County champs under Geisler, carding a 321 at Belk Park Golf Course. Senior Kolten Bauer shot a 4-under-68 to earn medalist honors. Marquette was also second in the small-school division of the Dick Gerber Invitational at Oak Brook Golf Course in Edwardsville. The Explorers tied Althoff with a 314, but lost on a scorecard playoff to take second.

Walsh enjoyed the best season of her seven-year coaching career with the Marquette girls golf team, guiding the team to Madison County small-school division and Class A Okawville Regional championships and a fifth-place finish at the state tournament at Red Tail Run Golf Course in Decatur.

Marquette qualified for state for the first time since 2000 after finishing third in the Centralia Sectional tournament. The Explorers also placed third in the Marquette Blast-Off Classic and lost only one match in dual action.

Walsh has been Marquette coach since 2012. Before this year, she had coached three individuals to a trip to the state tournament.