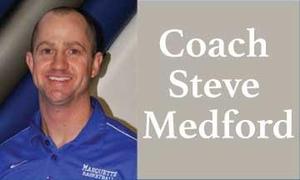 Friday night's boys basketball game victory against Nokomis (48-30) continued the winning streak for the Explorers and puts the 200th victory in the books for Coach Steve Medford.

Marquette coach Steve Medford signals his offense to run a play Friday night in Nokomis. The Explorers’ victory gave Medford career win No. 200 in his ninth season — all at Marquette — as a head coach.

He considers both as mentors and Bennett is among Medford’s closest friends. But neither of those coaching legends, Bennett nor Waldo, reached career victory No. 200 as quickly as Marquette Catholic’s Medford hit the milestone Friday night.

The Explorers extended their season-opening unbeaten streak to six straight with a 48-30 Prairie State Conference victory over the Nokomis Redskins to push Medford’s record to 200-54 with Marquette.

“Coming in here, you’re always down like 10-0 before you even walk in the gym,” said Marquette senior Chris Hartrich, who keyed a first half that ended with the Explorers up 28-8. “So any time you can get up on a team like this, with the history of Nokomis, it’s always a good feeling. … And this was great for coach Medford. He’s a great coach and we’re happy for him.”

“It’s a big difference when you’re a high school basketball coach and you get to be an assistant under somebody like that,” Medford said. “Dustin (Battas) is taking over for Waldo. He’s been under Waldo for a long time. I got to be under Lee, I got to see things.

“As a 22-year-old kid, I played and I coached and I thought I knew a lot. When I got under Lee, I realized I knew nothing. So to get to be in that situation and learn from someone like that, it means a lot to me. This program wouldn’t be where it’s at if it wasn’t for Lee and the way he taught us how to go about things.”

The Explorers took immediate command against Nokomis with an 11-3 lead five minutes into the opening quarter. The lead grew to double digits (15-5) on Brett Terry’s basket three minutes into the second quarter and reached 20 points when Hartrich’s four-point play with three second left made it 28-8 at the half.

It was a textbook display of what Medford hoped Explorers basketball would become when he took the job in 2010.

“I just love how my kids competed in the first half,” Medford said. “I think it was exemplary of how we have done everything. What I envisioned my program to look like was the first half – the effort, the defensive intensity, getting kids to play the right way, play hard and play with a lot of passion.

“When I first took this job, I wanted to get these kids to play like a Southwestern Conference kid on the defensive end. I think we’ve got them going in the right direction.”

Hartrich scored 13 points and Terry had 12 to lead Marquette, which got eight points from Spencer Cox and seven from Nick Hemann on a night when the Explorers went deep into their bench. Nokomis, which dropped to 2-4, got 10 points apiece from Alex Tosetti and Carter Sabol.

Medford’s milestone moment came against hall of fame coach Steve Kimbro, who has a long list of milestone victories in his 38 seasons at Nokomis. Kimbro holds at 790 career victories, two behind Vergil Fletcher at No. 7 all-time in Illinois history. Kimbro, who needed 13 seasons to get to 200, will become the seventh coach in state history when he reaches No. 800.