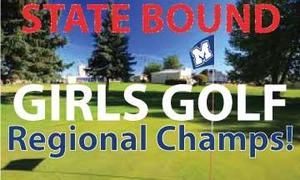 3rd Place Sectional Finish sends the whole team to STATE!
Marquette Catholic won the Class 1A Regional at the Roland Barkau Memorial Golf Course in Okawville, shooting a 326 in taking the crown.
Congratulations! OKAWVILLE- Marquette Catholic won the Class 1A Regional at the Roland Barkau Memorial Golf Course in Okawville, shooting a 326 in taking the crown. Columbia was second with a 342, and Civic Memorial advanced as a team with a score of 357, placing the Eagles third. Roxana finished ninth in the team standings with a score of 421.

Gracie Piar and Audrey Cain each shot a 78 to lead the Explorers, followed by Annie Kane’s 82. Katie Kratschmer shot an 88, while Clancy Maag and Cat Hollis both shot 98.

Marquette Catholic freshman Gracie Piar, shown lining up a putt in the regional last week at Okawville, shot 80 to lead the Explorers to a third-place finish and state berth Monday at the Centralia Class 1A

CENTRALIA – With two classmates leading the postseason charge, Marquette Catholic’s Clancy Maag has been relegated to “the other freshman” status.

Maag’s 94 seemed inconsequential as the first score posted for the Explorers on Monday at Greenview Golf Course, but it would inevitably send Marquette girls golf to the state tournament for the first time since 2000.

“That is so awesome,” Marquette coach Deb Walsh said of Maag’s role in Marquette’s celebration. “She has done such a good job, keeping her cool, staying with her game. She did a great job today.”

Just 12 strokes separated first from sixth in the team standings at the Centralia Class 1A Sectional, with Marquette claiming the third and final state berth after matching Columbia at 339. Pinckneyville won the sectional at 335 with Metropolis Massac County runner-up at 337.

The top three teams and top 10 individuals not on those qualifying teams advance to the Class 1A state tournament Friday and Saturday at Red Tail Run Golf Course in Decatur. Effingham was fifth at 343 and Effingham St. Anthony was sixth at 347.

Civic Memorial, in the sectional after placing third behind Marquette and Columbia at last week’s Okawville Regional, shot 383 to finish 10th in a 12-team field at Greenview. CM sophomore Gracie Sauder shot 89 – 22 shots better than her regional round – to lead the Eagles, who also scored 93 from Maisey Watson, 94 from Carmen Phillips and 97 from Reagan Watson.

Marquette again turned to its freshmen to carry the day after Gracie Piar and Audrey Cain tied for runner-up at the regional at 78. Piar was the last Explorer off the course and her team-leading 80 triggered the tiebreak process with Columbia.

Piar was pleased to help her team get to state, but her 80 at Greenview did not meet expectations.

“No, I’m going to be honest.” Piar said. “I left a lot of strokes out there. My putting was just not good. … I left quite a few putts short – and long. It started to get better at the end.”

And it was enough to deliver Marquette its ultimate goal in the sectional. Cain came in at 84, with junior Annie Kate Kane at 85 and senior Anna Lawless at 90 to put the Explorers at 339 and forcing tourney directors to revisit their math.

Marquette sophomore Cat Hollis shot 92 to match the fifth score for Columbia. That put Maag’s 94 in play and the Eagles’ 96 from their sixth and final score extended the Explorers’ season after going low in the regional with a 326 to beat Columbia by 16 strokes.