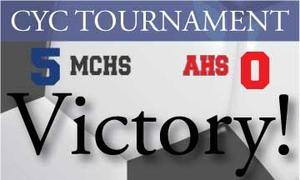 It has been 6 years since Marquette faced off against Alton High's Boys Soccer team. In front of large crowd of BLUE CREW, Marquette and Alton High fans, the Explorers blanked the Redbirds 5-0.

Marquette’s Chris Hartrich (2) moves in on goal as Alton’s Brayden Decker defends in action Friday night in the quarterfinals of the CYC Tournament at Soccer Park in Fenton.

FENTON, Mo. — Nick Funk wasn’t sure what to expect when his Alton High Redbirds took on crosstown rival Marquette Catholic Friday night. After all, it had been six years since the two teams had faced each other.

Following Marquette’s 5-0 victory in the quarterfinals of the CYC Tournament in front of a large crowd at Toyota Park, he knows one thing:

“They’re good, Funk said. “They’re really good. But we didn’t show up the first 20 minutes or so.”

The teams squared off for the first time since 2012 thanks to the way pool play results came out during the week-long tournament. The result means Marquette (11-0-4) will advance to the semifinals at 9 a.m. Saturday against No. 1 seed Columbia, which had a bye into the semifinals.

“Our boys were extremely excited,” Marquette coach Joe Burchett said. “And I was a little concerned about that going in. But they were able to focus and keep the emotions under control. And once we got a goal, it fell into place.”

Marquette’s Trent Dietiker scored from an assist by Noah McClintock at 16:34 on a play that Funk was less than happy with.

“The refs weren’t letting our sub on and (Marquette) basically scored its first goal when we were a man down,” Funk said. “But to be honest, that wasn’t anything that cost us the game.

“We knew we needed to come in and possess the ball,” Funk said. “That didn’t happen early.”

After their first goal, the Explorers had two more in rapid-fire order.

Chris Hartrich scored at 9:53 unassisted and McClintock added a third goal at 4:59 to make it 3-0 at halftime.

In the second half, the Redbirds came out regrouped and took control for a period.

“I think we had the better of the play the first part of the second half,” Funk said. “But we didn’t score.”

The Redbirds’ best chance at a goal came when Rooman Thomeczek hit the crossbar.

“Alton played really hard,” Burchett said. “I was extremely pleased with the way our boys handled it al. (Alton) can be a dangerous team. They’re very well-coached and they’ve got some excellent players.”

In the other quarterfinal game Friday night, Clayton downed Bayless 3-1. The Greyhounds will face Triad at 10:30 a.m. Saturday at SLUH in the second semifinal. The tournament championship game is scheduled for 6 p.m. Saturday night at Soccer Park.

“This is a great experience,” Burchett said. “But in a way, it’s asking a lot of these boys to come right back and play another game at 9 a.m. and hopefully, another one at 6.

“But that’s the way the tournament is set up and we’re happy to be in this position.”