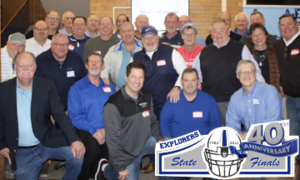 On January 6th, coaches, players, family, and friends came to celebrate the 1982 Explorer football team. It was a night to reminisce the glory days of an outstanding team and to celebrate being an Explorer!

The team was recognized for its 40th anniversary. Over 40 members from that year’s team were introduced in front of the large crowd on hand to watch the Explorers take on Breese Central.

The 1982 group is the only football team in Explorers’ history to have made it to the state championship game. The team was made up of 19 seniors, 27 juniors, and 19 sophomores and was coached by hall-of-famer John Rogers. They finished the regular season undefeated at 9-0.

“We have had many undefeated teams; some teams that were ranked #1 in the state; teams that reached the quarterfinals and the semi-finals - the Final Four; but the 1982 team is the only one to have played in the state championship, a distinction only a few teams in the Metro East region can claim,” Academic Dean Beth DeCourcey said during the halftime segment.

In the state championship game at Illinois State University vs Bishop McNamara, the game was tied 6-6 entering the 4th quarter. Bishop Mac went on to win 17-6, and the Explorers finished the season 12-1.

“These gentlemen here tonight were a catalyst for a great decade of football here at Marquette, with the 1980's having 8 winning seasons and 6 teams that qualified for the playoffs,” DeCourcey said.

The entire team was introduced including the following notable players:

After the team was introduced, coach John Waters spoke about the team. He was head coach from 1984-1993 and was an assistant coach on the 1982 team.

“The team was well supported by classmates, parents, alumni, cheerleaders, the dance team, and the community at large, often having more fans at away games than the home team - and always packing the stands at Public School Stadium,” DeCourcey said.

Since the football program’s inception in the 1970s, it has played almost 500 games and reached the IHSA playoffs 25 times.