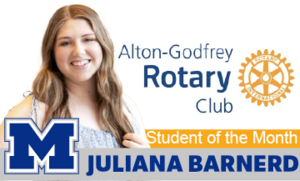 Juliana Barnerd's dedication to her academics, school leadership, and community charities was recognized by the Alton-Godfrey Rotary Club. Join us in congratulating Juliana for being named one of the Rotary's Students of the Month. Juliana Barnerd, the daughter of Amy and John Barnerd, is a senior at Marquette Catholic High School. She is currently the Student Body President and was Class President for her Freshman, Sophomore, and Junior years.  She is the President of the Marquette Fellowship Club and is also a member of the National Honor Society where she is on the tapping committee, and is a coordinator for the Sadie Hawkins Dance.  Juliana is also actively involved in the Rotary International Interact Club, where she enjoys participating in community service projects such as creating Christmas boxes for families in need and raising money for victims of the recent hurricane. Juliana is also a member of the Breast Cancer Awareness Club and Campus Ministry.

With a GPA of 4.2, Juliana has been on High Honor Roll for each semester of her high school career being selected for National Honor Society in her Junior year.  Juliana has performed more than 100 hours of community service during her time at Marquette, helping such community organizations as The Salvation Army, Miles for Meso, Sleep in Heavenly Peace, and the Christmas tree lot at St. Ambrose Parish.

Along with all of the clubs and organizations, Juliana is heavily involved with the theater department at her school, where she enjoys acting, singing, and even writing and directing some of the plays.   Juliana has performed in several plays and musicals including Alexa in Wonderland,  A Covid Christmas, and The Little Mermaid.  In her Junior year, Juliana played the lead roles in Marquette’s production of The Alibis and in last spring’s musical Once Upon a Mattress.  She is also a member of the Marquette Choir, where she performs at local churches, hospitals, and schools. She has also competed in the IHSA Vocal competition all three years of her high school career. In furtherance of her passion for acting, Juliana has attended Interlochen Center for the arts her last three summers and worked this past summer at the Muny in Forest Park.

In her spare time, Juliana looks forward to spending time with her friends and family and her two dogs along with singing, acting, and listening to music.

Juliana plans to seek a Bachelor of Fine Arts  in Theater and Acting at a four year college and is currently in the application and audition process for several schools around the country.