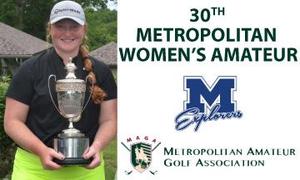 At five-over par and a six-stroke lead, 2022 MCHS graduate, Gracie Piar, is the 30th Metropolitan Women’s Amateur Champion. Sporadic showers and sprinkles dampened the final round. When asked about how the rain factored in to her round, Piar said "I actually prefer playing in the rain because not a lot of people can do it, and I can, so it's an advantage."

“That tournament was awesome,” Piar said of her first appearance at the event. “It was at Lake Forest and that’s a really nice golf course. It was a fun tournament to win. Big trophy with my name engraved, that was nice. I played really well both of those days.”

Piar was one-shot off the lead after shooting 75 in the first round of the 36-hole tourney. Madison DeRousse, coming off her college senior season at Illinois-Springfield, was the first day leader at 74 and joined Piar as the only golfers to break 80.

Piar came back with a 74 the next day, with DeRousse falling back with an 81 to give Piar a six-stroke victory at 149. DeRousse, the tourney’s runner-up in 2018, was second at 155 with Madeline Larouere 17 shots off the pace at 166 to place third.

Piar in mid-June played in the 89th Illinois State Women’s Amateur at The Grove Country Club in Long Grove. “That is one of my favorite tournaments of the summer,” Piar said.

And for the second successive season, Piar made the cut in stroke play and advanced through three rounds of match play before being eliminated by the eventual state champion in the semifinals.

All three locals got through the Round of 32 with match victories and came back for the Round of 16 later on the same Tuesday with the temperature reaching 96 and a heat index ranging from 105-109.

Lewis lost on the 19th hole, while both Piar and Johnson won 4-and-3 to make Wednesday’s quarterfinals. Bolingbrook’s Sarah Zheng, who finished 17th in the IHSA Class 2A state tourney last fall as a Neuqua Valley senior, defeated Johnson 2-up.

In the quarters, Piar played Winnetka’s Penelope Tir, a 21 year old who won the Illinois Class 2A state championship with New Trier in 2017 and is now playing at Dartmouth. Piar broke a tie by winning hole Nos. 15 and 16 to win 2-up and get to Thursday’s semifinals.

Piar was paired in the semis with Duke’s Megan Furtney, a third-place finisher for St. Charles North at the IHSA Class 2A state tourney in 2018. Piar was 1-up after 15 holes, with Furtney winning on 16 and 17 before Piar won 18 to force a 19th hole won by Furtney.

“That was a really fun match,” Piar said of her semifinal defeat. “She was up on me the whole front nine – like 1- and 2-up – and the back nine, we finally got back to even and I had her 1-up. Unfortunately, she beat me on that 19th hole.”

Furtney went on to beat Grace Curran, a 2016 IHSA Class 2A state champion with Lincoln-Way Central, in the championship match 2-up. Last year, Curran defeated Piar in the semifinals before winning the title.

“It’s amazing, so awesome to play with both of them, really,” Piar said of Minnesota’s Curran and Duke’s Furtney. “Last year, I played with Grace and I got so much insight on college. Same with Megan Furtney.”

Furtney has her own podcast on college women’s golf and what incoming players can expect. “Everything you need to know, really,” Piar said of Furtneys podcast. “I just love listening to that. It was so awesome to play with her.”

Piar, Johnson and Lewis continued on their shared summer path by playing in the 95th Women’s Western Junior Tournament at Prestwick Country Club in Frankfort. All three had a tough opening round, with Lewis and Johnson both shooting 80 and Piar coming in at 83.

“Oh, wow,” Piar said with a laugh. “Actually, I hadn’t shot in the 80s at all this summer until, except that day. It had been a while. … Everything was off. I did not have my ‘A’ game that day. My tee ball wasn’t terrible. But my short game and my irons, they just weren’t there. If I didn’t hit the green, I couldn’t get up and down.”

Piar’s senior season at Marquette ended with a Class 1A state championship last fall after shooting rounds of 65 and 71 to win by five shots at Red Tail Run in Decatur. Piar’s 136 was the lowest score in the state tournament, in any class, since 2007.

Piar will begin her collegiate career in August when she reports for practice at Cal State-Northridge, but a busy June will be followed by a busy July for Piar. Along with Lewis and Johnson, Piar played close to home Tuesday in the Junior PGA Championship qualifier at Spencer T. Olin, with a second round on Wednesday.

Piar will play in the U.S. Amateur Qualifier in Tennessee in two weeks and close July in the Ladies National Golf Association Amateur Championship at Lake Forest CC in St. Louis on July 26-28. If she is unable to qualify for the Junior PGA or U.S. Amateur, Piar will play in the Illinois Women’s Golf Association Juniors on Aug. 2-3 at the prep state-tourney course at Red Tail Run in Decatur.

Click here to hear her interview after the tournament.