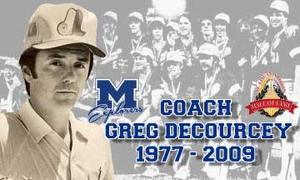 During Coach Greg DeCourcey 33 years of coaching, he guided the Explorers to 2 IHSA State Championships, one 2nd place finish, 15 Regional & 7 Sectional Championships, and 7 Elite 8 appearances. We congratulate you and thank you for your dedication to our student-athletes!
Congratulations to Marquette’s Greg DeCourcey who was inducted into the St. Louis Sports Hall of Fame on May 16, 2022. “Coach D” was joined at the ceremony by his family and a contingent of former Marquette players and coaches. Coach is the 2nd Explorer to be a member of the St. Louis Hall of Fame, joining fellow Explorer Craig Hentrich.
Coach DeCourcey guided the Explorers to two IHSA State Championships, one 2nd place finish, 15 Regional Championships, 7 Sectional Championships and 7 Elite Eight appearances. Coach is forth all time for most wins at one school with 641! He is also a member of the Illinois Baseball Coaches Hall of Fame! Congratulations Coach on this great achievement and recognition of your thirty years of commitment to Marquette Catholic student-athletes. On Explorers!