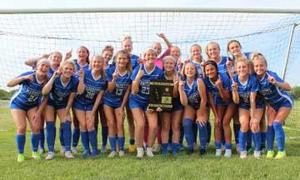 Marquette girls soccer secures their 12th Regional Championship title on Friday, May 13. The Explorers finished their regular season with a record of 13-6-3. The Explorers will move on to face Sacred Heart-Griffin in the Sectional Semifinals on Tuesday, May 17 at 6 p.m. at Quincy Notre Dame.

GREENVILLE – The Alton Marquette girls soccer team were crowned Regional Champions Friday afternoon (May 13) after they defeated the Greenville High School Comets by a score of 7-1.

It marks the 12th time in school history the Explorers have won a regional plaque with the last time coming in 2019.

The Explorers finished their regular season with a record of 13-6-3.

“I think getting results is sometimes taken for granted,” Marquette head coach Brian Hoener said after the win.

Marquette wasted literally no time getting onto the scoresheet against the Comets. Nine seconds into the game, pretty much right after the kickoff, senior midfielder Jillian Nelson made a great heads up play. She noticed that Greenville’s keeper was quite a bit off her line, so Nelson took a shot from right inside half field and soared it into the back of the net to make it 1-0.

In the 15th minute, the Explorers doubled their lead. Freshman forward Ella Anselm crossed a ball in toward the back post and junior midfielder Caroline Stephan was there to put it home.

Five minutes later Anselm scored from right around the 18-yard box. Greenville’s keeper got a touch, but it wasn’t enough to stop the shot. Her 26th goal of the season, which leads her team, made it 3-0 inside 20 minutes.

In the 38th minute another freshman scored. This time it was midfielder Lily Covert. After the ball ricocheted off of a Greenville defender it bounced back to her for an open look at net. She scored easily from rather close up.

The last goal of the half came from Stephan. She scored her second of the day in the 39th minute. A through ball came to her as she was crossing half field line. She ran on to it and only had one defender to beat. She did so and then beat the keeper once again to make it 5-0 headed into halftime.

Nelson and Anselm each scored again in the second half to make it seven. The Comets did score, but it was only a consolation.

Three players each had two goals for Marquette with four different goal scorers overall, something coach Hoener loves to see.

“The objective was to play to our skill level and play to our talent level and I think we did that. I’m happy with the way we played,” Hoener added.

The Explorers will move on to face Sacred Heart-Griffin in the Sectional Semifinals. That game is set for Tuesday May 17 at 6 p.m. at Quincy Notre Dame.