Rotary Student of the Month 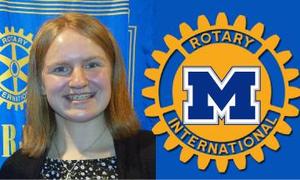 Elizabeth Guenther's dedication to her academics as well as her leadership and participation in multiple school, church, and community charities was recognized by the Alton- Godfrey Rotary Club. Join us in congratulating Elizabeth for being named one of the Rotary's Students of the Month. Elizabeth Guenther, daughter of Thomas and Amy Guenther, is a senior at Marquette Catholic High School. Maintaining a 4.7 GPA on a 4.0 scale, she is a member of the National Honors Society, the National Society of High School Scholars, and was named an Illinois State Scholar. Along with her extensive academic achievements, Elizabeth is active in activities both at school and in her community. She has been a captain of the Marquette Scholar Bowl team and competed on the Academic Challenge team in chemistry, math and English. As a leading member of the theater department, she has performed in musicals and plays, also contributing as a student director and playwright. Three of her published scripts have been performed publicly at multiple schools. As a founding member of the Marquette Prolife Club and an active member of campus ministry, Elizabeth puts her faith into action.

In her community and home parish, Elizabeth has also taken leadership roles and participated in community service such as raising money and supporting charities, including Socks-A-Lot and Billy’s Kids. As an active parishioner of St. Elizabeth Parish in Granite City, she is a lector and Extraordinary Eucharistic Minister and volunteers at the parish picnic and fish fries. Elizabeth is also directing one of her plays for the kindergarten through 8th grade students of St Elizabeth Drama Club.

She plans to attend a four-year university with a double major in business and creative writing and continue to participate in many extracurriculars, including theater and campus ministry, throughout college. Her dream is to one day open her own business and become a published young adult author. She hopes to increase women’s presence in the business world, and create strong charters that will inspire the next generation of readers.