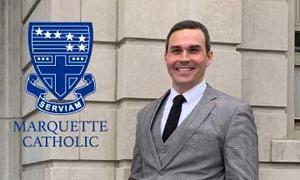 The board of directors of Marquette Catholic High School is pleased to announce Mr. Tim Harmon as principal for the 2022-23 school year. For 10 years, Mr. Harmon has been a valued member of the MCHS faculty.

“In a short period of time, Tim has shown extraordinary leadership in representing the school” said Board President David Bartosiak. “His willingness to serve Marquette Catholic is great news for the students, parents, faculty, and staff. We believe he is absolutely the right person to lead the Marquette family at this time.”

Harmon is a ten-year veteran of Marquette Catholic, where he started in the social studies department in 2012. He is regarded and respected as a talented teacher by both parents and students, and he will continue to teach two sections of Honors U.S. History.

“Both my son and daughter spoke very highly of Mr. Harmon,” said Michelle Stork, a member of the board of directors and parent of two Marquette graduates, both of whom are at the Naval Academy in Annapolis, Maryland.

“Tim has proven to be a natural leader. He has the ability to be patient and kind while simultaneously having high expectations of the students,” said Bartosiak.

In August 2020, Harmon was named Dean of Students and served in that role until December 2021, when he was appointed to his current role. He has also served as assistant coach for both the boys and girls soccer teams, National Honor Society faculty moderator, and assistant athletic director.

“In accepting this latest challenge, I want to express how excited I am for this opportunity. Marquette is a great institution full of students eager to learn, and teachers who truly care about their overall development. I am honored to lead them,” Harmon said.

“Growing up and playing soccer with Tim, I could always count on him to put in maximum effort to make our team better. Now, twenty years later, as a Catholic priest I am honored to be on a team with Tim once again, a team rooted in faith. With the grace of the Holy Spirit, I am confident Mr. Harmon will put in maximum effort to lead Marquette Catholic as our new principal,” said Father Paul Kallal, OMV, Director of Campus Ministry.

Harmon resides in Jerseyville, Illinois, with his wife Natasha and their six-year old daughter, Ava. He and his family are members of Holy Ghost Catholic Church in Jerseyville.

Marquette Catholic is a co-educational, college prep school of 421 students, founded in 1927.