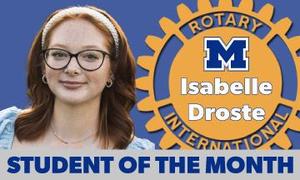 Senior Isabelle Droste's commitment to her academics as well as her exemplary service to her school and community was recognized by the Alton- Godfrey Rotary Club during the club's February meeting. Join us in congratulating Isabelle for being named one of the Rotary's Students of the Month.

Students of the Month for February 2022

Friday, February 4, 2022
By: Larry L. Thompson
THE ROTARY CLUB OF ALTON-GODFREY HONORS FEBRUARY 2022 STUDENTS OF THE MONTH.
Isabelle Droste of Marquette Catholic High School was honored as Students of the Month for December at the regular meeting of the Rotary Club of Alton-Godfrey at Gentelin’s Restaurant. Isabelle Droste is a senior at Marquette Catholic High School. She is the daughter of Lucy Hendrix and Matt Droste. She has been on the high honor roll every semester since her freshman year. Isabelle has a 4.69 grade point average on a 4.0 scale, and she was selected as an Illinois State Scholar.

In addition to her academic accomplishments, Isabelle has also been a captain of the Scholastic Bowl team since her freshman year. She has also been a member of the girls' golf team for all four years. Throughout her time at Marquette, Isabelle has been involved in multiple clubs and holds several different leadership positions. She is the president of the Interact Club, a Rotary-sponsored club, and she has been involved with Interact for three years. Isabelle is also the president of the Rose Morelli Chapter of the National Honor Society, to which she was inducted during her junior year. Isabelle has also participated in Students Against Destructive Decisions, Student Council, Student Ambassadors Club, Campus Ministry, Breast Cancer Awareness Club, Yearbook, and Students for Soldiers Club. Isabelle is most proud of her dedication to an organization she created and leads named Students Offering Support or S.O.S. The S.O.S. club is a mental health awareness group that benefits the entire student body at Marquette. Their mission is to create a supportive, inclusive, and informative space for all students, no matter their background or current situation.

Isabelle demonstrates Marquette’s Serviam values through her over 260 hours of community service. Isabelle has volunteered her time at the Salvation Army, American Red Cross, St. Baldrick's Foundation, the Illinois Department of Natural Resources, and many more. Isabelle Droste plans to attend the University of Nebraska-Lincoln in the Honors Program. She will major in psychology on the pre-med track in hopes of becoming a pediatrician.
http://altongodfreyrotary.org/index.php Source: Alton-Godfrey Rotary Club