"It's all about the mind set" 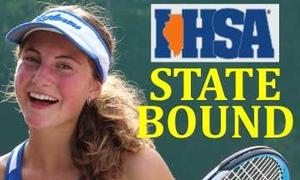 The IHSA’s Girls State Tennis Tournament is scheduled as a three-day affair. But for the Telegraph-area’s surviving players, it lasted two days.

Wendle, a senior, won her fourth-round match with Oak Park Fenwick’s Kate Trifilio 6-3, 6-0, top advance to the fifth round. But that’s where the tourney ended for Wendle.

In the fifth round, Agnes Cross of Springfield Sacred Heart-Griffin knocked off Wendle 6-4, 6-1.

Meanwhile, in doubles action, Jersey’s Ingram and Noble were defeated in the fourth round in consolation play by Elmhurst Timothy Christian’s Clarissa Chen and Jane Carter 6-4, 6-3.

Wendle defeated Kailey Walter of Waterloo 6-4, 6-0 in Thursday’s first round. She then lost to Chicago University High’s Sanskriti Sarav 6-0, 6-0 and moved to the consolation bracket. Wendle won a third-set tiebreaker 10-4 over Belleville Althoff’s Natalie Cohn and then defeated Elmhurst Timothy Christian’s Angie Tornabene 6-0, 6-1 to advance to Friday’s play. ALTON - Senior Monica Wendle is the type of student-athlete any coach would love to have on their team. She is not only an exceptional tennis player but a straight-A student and a positive, solid leader for the Marquette Catholic tennis girls.

Monica qualified for the IHSA Class 1A State Tennis Tournament in the Chicago area later this week on Saturday and Monday at the Triad Sectional. Monica is the Jeff Lauritzen-Country Financial Marquette Catholic Female Athlete of the Month.

"I hope to be a positive influence on everybody I see," Monica said. "I am pretty sure going to Lewis and Clark to play tennis; Kathy (Claywell) helped me get set up there. I think I either want to be an elementary or middle school teacher and possibly have a side business. I really enjoy tennis, it is my family. We all like going out and having fun on the courts. I am in all honors at Marquette Catholic, and I strive for straight As each quarter and have done that each quarter since my start in high school."

Monica thanked her sister Maria for playing tennis with her on a bunch of different nights this past summer and school year.

"I thank my parents for encouraging me and keeping me strong in my faith in God which helps me play tennis to the best of my ability," she said. "I would like to thank Coach Walters for his awesome tennis advice and for continuing coaching (he was going to retire from coaching a couple of years ago but we made a card with individual notes from each of the tennis players… it worked!)."

Monica said when you are a tennis player, you figure out that the sport is all about mindset.

"You have to begin each point like it’s a new one," she said. "What’s helped me win matches is reminding myself that I am so fortunate to have the health and abilities to play, counting my blessings, and thanking God for the opportunities. I love getting to meet girls from other teams and talk with them throughout the match. This helps the match stay lighthearted and fun!"

The Explorers' senior tennis star said her favorite part of the sport is meeting people.