Former Softball Stand Out: Pitches In to Secure a Win 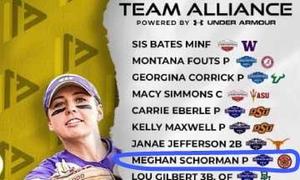 MCHS graduate, Meghan Schorman ('18), and her Team Alliance teammates, hand the USA Olympic team their first loss in the "Stand Beside Her" fast-pitch softball tournament in Midland, Texas.

The first inning was a quick one for both teams, with each pitcher only facing three batters and Cat Osterman (Houston, Texas), starting in the circle for the U.S., closing out the inning with a strike out.

Team USA put five runners on base in their next two at-bats but failed to bring anything across the plate while Osterman kept Team Alliance off the boards until a grand slam in the third inning by Missouri grad Taylor Ellsworth plated four in what would ultimately be the deciding blow in the game.

The U.S. put a pair of runners on with two walks from Valerie Arioto (Pleasanton, Calif.) and Dejah Mulipola (Garden Grove, Calif.) in the top of the fourth. Stewart came through with a hard line drive to left field to reach on an error and score a run for Team USA.

A ground out to end the inning left two base runners stranded, but not before the U.S. added a run and cut Team Alliance’s lead to 4-1.

Osterman dominated the fourth inning with three strikeouts to send the U.S. back to the plate in the top of the fifth. Aguilar collected the lone hit of the inning for Team USA with a triple to center field but failed to score after back-to-back ground outs retired the side.

Monica Abbott (Salinas, Calif.) entered to pitch in the bottom of the fifth inning and issued three strike outs to shut down Team Alliance and send the game to the sixth with the U.S. still trailing 4-1.

A two-out rally loaded the bases for Team USA after a walk from Chidester followed two singles from Hannah Flippen (San Diego, Calif.) and Stewart. The U.S. was unable to come through in clutch, though, as a ground out to first ended the at-bat.

Abbott continued to deal in the circle with a three-up, three-down inning in the bottom of the sixth. Team Alliance followed suit, however, and ended the game with a 1-2-3 inning and secured a 4-1 win over Team USA.

and gave up the only run while Carrie Eberle (Oklahoma State) and Savannah Wysocki (Lubbock Christian) each pitched one inning without allowing Team USA to cross the plate.

Also impressive for Team Alliance was leadoff hitter Lou Gilbert, the infielder for Baylor, who went 2-for-3 and scored on Ellsworth’s grand slam. She ended up with a strong 4-for-5 day at the plate.

The WNT is now 18-1 on the “Stand Beside Her” tour, presented by MLB, collectively hitting .314 with seven batters hitting over .300.

McCleney leads the offense with an impressive 12-game hit-streak in addition to her team-leading eight home runs on the pre-Olympic tour.

The U.S. pitching staff added 38 strike outs this weekend, totaling 193 with Osterman leading the way with 68 K’s followed by Abbott with 54 and Carda with 39. Meghan Schorman (photo from 2017-Junior Year) was named to The Illinois Coaches Association's 2018 All-State Team her senior year. After graduating from Marquette, Schorman continued her softball career while attending KU. With her transfer to Louisiana this fall (2021), Meghan will be soon be playing for the Ragin' Cajuns. She is currently playing for Team Alliance, which will be made up of collegiate and/or professional athletes supported by The Alliance Fastpitch member leagues.