Add a Little Drama to the Summer...Camp! 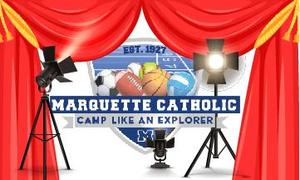 MCHS Theater & Music Director, Brett Klaus, is excited to host this year's Camp "ACT, SING, & DANCE" Like an Explorer! Your camper will experience the thrill of working with professional singing, dancing, and acting instructors. Sign up today! About this year's Masterclass Instructor

Emily Truckenbrod, soprano, is an Associate Professor and the Director of Vocal Studies at SIUE. She has appeared in recital, concerts, and opera throughout the United States as well as in Italy, France, Austria, Honduras, and Tanzania, East Africa. Her voice has been described by reviewers as “having sweet clarity” which “personifies the joy of the music.”

On the opera stage, she has appeared as the Queen of the Night and Papagena (The Magic Flute), Susannah (The Marriage of Figaro), Adele (Die Fledermaus), Adina (L’elisir d’Amore), Marie (The Daughter of the Regiment), Gretel (Hansel and Gretel), Oscar (Un Ballo di Maschera), Nella (Gianni Schicchi), Yum Yum (The Mikado) and Monica (The Medium). Equally comfortable with oratorio and orchestral works, Ms. Truckenbrod has appeared as soloist with the Tulsa Oratorio Chorus, the Louisiana Philharmonic Orchestra (New Orleans), The Wichita Symphony (Kansas), the Canterbury Choral Society and Oklahoma City Philharmonic (Oklahoma City), the Quad Cities Symphony Orchestra (Illinois/Iowa), the Richmond Symphony (Indiana), The Handel Oratorio Society (Illinois), The American Kantorei (St. Louis), the LaFosse Baroque Ensemble (Iowa), Concert Choir of Northeast Connecticut, the Northshore Choral Society (Louisiana), among others. An enthusiast of contemporary art music, Ms. Truckenbrod has been a featured soloist at Society of Composers (SCI) National and Regional Conferences, the Midwest Composers Symposium, and numerous times with the Center for New Music at the University of Iowa.

Dr. Truckenbrod holds the Doctor of Musical Arts and Master’s Degree from the University of Iowa, and a Bachelor of Music from Northern Illinois University. She has completed additional studies at the Mozarteum in Salzburg, Austria, the Eastman School of Music and as an intern with the National Association of Teachers of Singing Intern Program. In the past, Dr. Truckenbrod has presented or performed for Music Educator Associations, the College Music Society, the American Musicological Society, the ATHENA festival, and the National Association of Teachers of Singing. Her students have won awards, attended prestigious summer and graduate programs, and have sung professionally in the United States and abroad.