Roderfeld Signs his Letter of Intent 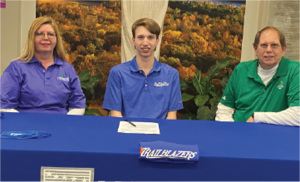 The Commons was filled with well wishers as William Roderfeld signed his letter of intent to play golf with Lewis and Clark Community College. Roderfeld's success on the links was also acknowledged by being named the Jeff Lauritzen-Country Financial Athlete of the Month for Marquette. Congratulations!

William Roderfeld Signs To Play Golf At LCCC, And Is Jeff Lauritzen-Country Financial Male Athlete of Month For Marquette Catholic

For his accomplishments on the golf team, along with taking the next step in his golfing career, William Roderfeld has been named the Jeff Lauritzen-Country Financial Male Athlete of the Month.

The celebration for Roderfeld was a big one, with friends from school, teammates, coaches, and family around to witness the big sign-on moment. After the signing and many pictures, Roderfeld was met with many people waiting for the chance to shake his hand. It was clear he has a lot of friendship and support surrounding him.

While Roderfeld is at Lewis and Clark Community College he will major in electrical engineering.

Roderfeld stayed busy while at Marquette. He was on the golf, bowling and volleyball teams, trapshooting team, and bass fishing team.

“Marquette has prepared me academically to be successful at Lewis and Clark and in the world," Roderfeld said.

The Lewis and Clark Community boys golf team is coached by Gerald Mozur. He will join Marquette teammate Sam Cogan at LCCC.