And the Grammy goes to... 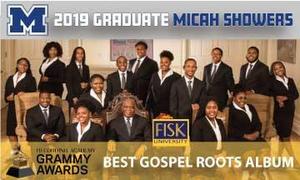 Congratulations to Marquette graduate Micah Showers ('19) and the the Fisk University's Jubilee Singers on winning a Grammy for their 150th Anniversary album, Celebrating Fisk! 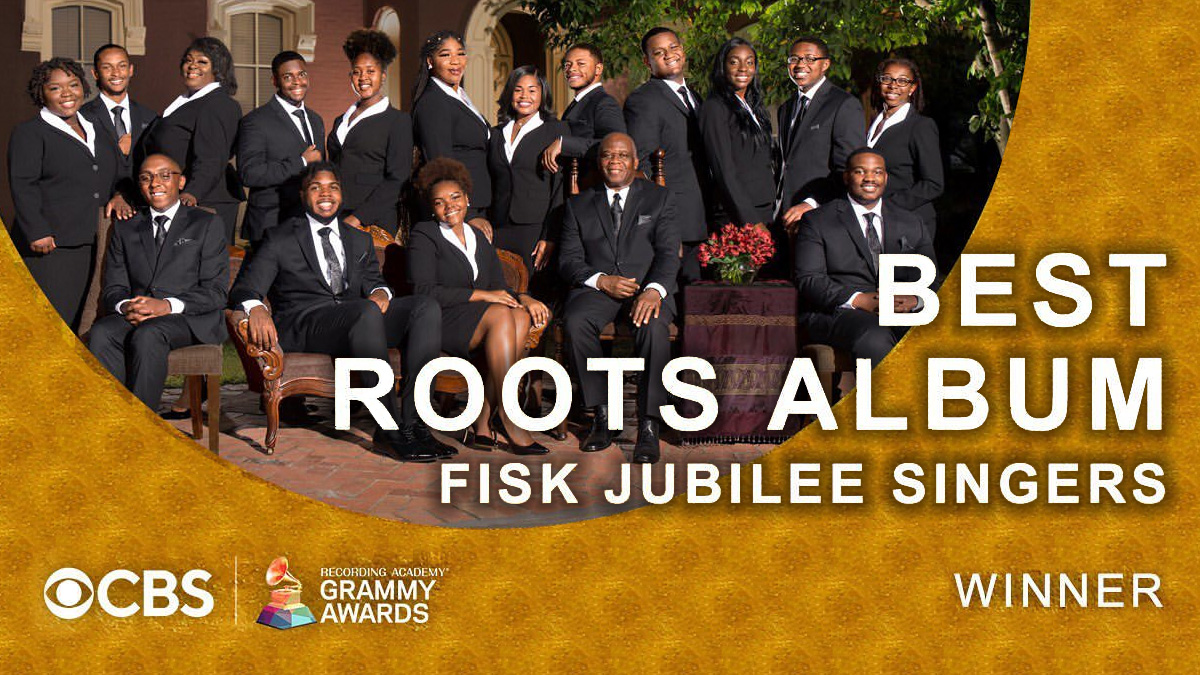 Curb Records is excited to announce a 2021 GRAMMY® win for the Fisk Jubilee Singers’® album, Celebrating Fisk! (The 150th Anniversary Album), in the Best Roots Gospel Album category. Listen to the album HERE.

Shannon Sanders, album producer, also shares, “I am both humbled and honored to be a part of this historic moment. Congratulations to Dr. Paul T. Kwami, the Fisk Jubilee Singers, Fisk University, Curb Records, and all of the phenomenal artists, musicians and engineers that contributed to this incredible project.”

The album, which is more than 150 years in the making, is a collection of 12 songs that beautifully represents and communicates the powerful and vibrant history of Fisk University, Fisk Jubilee Singers, and the city of Nashville. It features the group from the stage of Nashville’s historic Ryman Auditorium, with guest appearances by Ruby Amanfu, Keb’ Mo’, Lee Ann Womack, The Fairfield Four, Rod McGaha, Derek Minor, Shannon Sanders, Rodney Atkins, Jimmy Hall and CeCe Winans, and was produced by Shannon Sanders, Paul Kwami, Jim Ed Norman, and Mike Curb.

“How exciting for the Fisk Jubilee Singers to be recognized for their hard work and dedication, not only on this album, but throughout history,” shares Curb Records Chairman, Mike Curb. “I have been blessed to work with Paul Kwami, who is a musical genius and a national treasure. This GRAMMY also honors Fisk University’s 150th Anniversary, which is so important for Nashville and our entire country. This is a momentous day for Fisk, the Curb Records team, and everyone that has been part of this project.”

Founded in 1866, Fisk University is a private, liberal arts university located in Nashville, Tennessee. Consistently recognized for its brand of academic excellence, Fisk is ranked No. 6 on the Top 10 Historically Black Colleges and Universities (HBCU) in the 2019 U.S. News & World Report. Fisk also ranked No. 1 in the nation among HBCUs for social mobility and No. 3 in the nation for research expenditures among small liberal arts colleges. Fisk University is deeply committed to student leadership, success and service. Fisk excels at preparing our highly motivated student body for elite graduate schools and outstanding careers. From the classroom to the boardroom, a Fisk education gives students the tools to turn their passions into careers and prepares them to make a difference in the world. To learn more about Fisk University, please visit www.fisk.edu