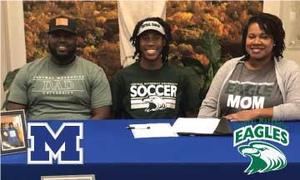 Senior R.J. Parker signs his letter of intent to play soccer at Central Methodist University in Fayette, Missouri this fall. A ceremony was held in the MCHS commons on Wednesday, January 20th. The MCHS Athletic Office hosted a ceremony celebrating the signing of a letter of intent for R.J. Parker to play soccer for the Eagles. Athletic Director, Brian Hoener, proudly presented over the signing on Wednesday, January 20th.  R. J. Parker's parents, Rennell, Sr. and Chasity Parker, coaches, staff and fellow teammates filled the Commons.
Parker stated that while at Marquette "the teachers have been amazing" and they have helped him reach his goal, allowing him to continue his education while playing soccer for the Central Methodist University Eagles. R. J plans on studying marketing.