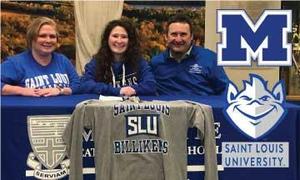 Surrounded by her family, coaches and teammates, Madelyn Smith signed her letter of Intent to play Division 1 soccer with the St. Louis University Billikens.

Madelyn Smith of Marquette (18) has announced that she will play soccer next season for Saint Louis University. Above, Smith moves the ball while being marked by Olivia Mouser of Roxana during a 2019 Class 1A regional game.

ALTON — Madelyn Smith is a bit of an oddity among high school athletes during the worldwide health crisis. The coronavirus pandemic didn’t affect her college recruiting process one bit.

She made sure of that by making her decision early - before COVID-19 began spreading around the world. That choice kept things a bit more quiet around the house and made Saint Louis University happy as well.

So on Thursday when Smith, a senior, signed her NCAA national letter-of-intent to play for the Billikens, it was part formality - and part celebration.

“I’m very excited,” Smith said of her decision to become a Billiken. “I’ve known for a while now that it’s where I wanted to go.

“I kept my options open, but once I stepped onto the campus and met some of the players, I was sure.”

Smith will be the second former Marquette player to become a Billiken. Annabelle Copeland, a former Telegraph Player of the Year, is a senior at SLU.

Smith, an attacking center midfielder, made an oral commitment to SLU following her sophomore season at Marquette. Because of the pandemic and the resulting shutdown of spring 2020 sports, that was the last time Smith played a game for Marquette. The Illinois High School Association shut down spring sports last year.

“It was a real bummer,” Smith said of missing her junior season. “It was my older sister Quinn’s last season, but she and the other seniors didn’t get a chance to play.

“We thought last year would be our year, too,” she said. “It was kind of a letdown.”

Not that Smith’s been lollygagging around with nothing to do and no soccer to play. She’s remained busy with classes at Marquette and plays club soccer for the Lou Fusz Soccer Club. In fact, she helped her 2003 Blue team capture the club’s first national championship last July in Overland Park, Kansas.

In fact, Smith provided the game-winning goal in the second half of the championship game 2-1 win over Legends Indland Empire from California.

at the club’s complex off Creve Couer Lake Road in St. Louis County, and one indoors at the team’s facility, the former Rams Park in Earth City.

“We’re extremely proud of Madelyn and thrilled for her,” Hoener said. “Saint Louis U. is getting a tremendous player, person and student. Madelyn has an extremely high soccer IQ, tremendous technical ability and is a wonderful teammate.

“It’s great to see her get rewarded for all the hard work she has put in to become one of the area’s top players.”

As a sophomore, Smith scored 11 goals and added nine assists. Her freshman year, she score eight goals and had nine assists. And while there are no junior-0season statistics because of the IHSA shutdown, she hopes she can add to her high school stats in the schedule-adjusted summer season, which is set to begin in May and run through June.

“I really hope we have the summer season,” Smith said. “It would mean a lot to go out being able to play.”

Smith, who lives in Florissant, said her decision to go to SLU is the second positive school choice she’s made.

“I’m so happy I decided to go to Marquette, 100 percent,” she said. “The education, the teachers, the coaches and my friends have helped make it the right choice.”