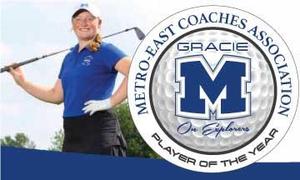 Join us in congratulating the entire girls golf team for being named to the Metro-East Coaches Association All-Area 1st and 2nd teams. This just highlights their successful season. ALTON - It was indeed a banner year for the Marquette Catholic girls golf team, and on Friday, the Metro-East Golf Coaches Association honored the Explorers by naming junior Gracie Piar its Class 1A Player of the Year, while naming all of the players to its Class 1A all-area team.

Piar and fellow juniors Audrey Cain and Clancy Maag were named to the first team, while senior Cat Hollis and sophomores Ava Bartosiak and Lilly Montague were placed on the second team. That the entire Marquette team was named all-area is quite an honor for the Explorers and their successful season.

"It is," said Marquette head coach Deb Walsh. "Those girls worked hard all year, and Gracie really had a great year. She finished first in the regional, and second in the sectional. She really had an outstanding year. The entire team made the first and second team, and we had player of the year. What an honor it is to have your entire team named that way. It's just such a great honor."

Both teams have outstanding talent, which bodes well for the future of girls golf in Metro-East. Besides Piar, Cain and Maag, the first team consists of seniors Chloe Kraus of Okawville, Malia Kossina of Columbia, Olivia Quigley of Marissa-Coulterville, Maliyah Phillips of Waterloo GIbault Catholic, Lidia Madrigal-Kaltenbronn of Waterloo, and Claire Korte of Highland, and sophomores Sophee Brown of Civic Memorial, Calli Smith of Waterloo, and Bria Tuttle of Jersey.

"We are starting to see some good players in the Metro-East area," Walsh said, "and they're starting to come around and make a good showing."

And there's also some good young talent in the area, and both Brown and Tuttle are going to make an impact along with, according to Walsh.

"I agree with that," Walsh said. "Sophee and Bria are only sophomores, "and we've got some good players and good teams around the area. I think you'll see some good matches and great scores all around next year."

As far as her team goes, Walsh is already looking ahead to the 2021 season, and is expecting a big year for all of her players.

It was a great 2020 season for Marquette, and Walsh is looking ahead to a great 2021 campaign ahead.

"We just had an outstanding season," Walsh said, "looking ahead to next year, and I think we have some great, great things in our future."