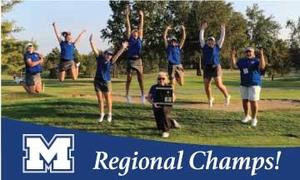 The MCHS girls golf team wins back to back Regional Championships. Juniors, Gracie Pair and Audrey Cain came in 1st and 2nd place respectively. The team advances to Sectionals this weekend in Salem, IL.

No joke, Piar’s 4-under 68 leads Marquette to regional title

No joke, she did.

The Marquette junior opened with a 35 on the front nine, went eagle on No. 10 and was low as 5-under par after 14 holes before settling for a 4-under 68 to lead the Explorers to the championship of the Marquette Class 1A Regional at Spencer T. Olin.

“Gracie is Gracie, I love watching that kid play,” said Civic Memorial coach – and Gracie’s neighbor – Josh LeMond. “She’s been my neighbor for a long time. And I remember sitting out front and watching her hitting into her net, hitting into her net. And I told my girls last year, you know how to be good? I gave them Gracie’s example. That’s what it takes to be good. She’s a joy to watch.”

Both East Alton neighbors had reason to celebrate at Olin, where the Explorers earned their third successive regional title while LeMond’s Eagles were runner-up to claim the second team berth to Monday’s Salem Sectional at Salem Country Club.

“Last night, I looked at our regional score from last year,” LeMond said. “Couldn’t sleep, tossed and turned. We shot 451 last year. I know the weather was way different, but to turn a 451 into a 391, especially with the young team that we’ve got, these girls continue to impress me every day. As a coach, you couldn’t ask for better.”

Ava Bartosiak completed the Explorers’ scoring while placing eighth at 92. Marquette also put Cat Hollis, its lone senior, in the top 10 with a 95 that was not needed in the team total.

Two bogeys were offset by four birdies and that eagle on the par 5, hole No. 10. Piar said she had nothing that approached a bad hole.

“Even on 15 I bogeyed, I was just off the green and three-putted” Piar said. “But no, I wouldn’t even consider that bad.”

“She just keeps getting better and better,” Walsh said. “And the score she shot today is just an awesome score. The course wasn’t set up super easy and the pin placements were tough today. And Gracie made sure that she was able to get through the course.”

The IHSA has reduced sectional qualifiers from regionals’ top three teams and 10 other individuals to the top two teams and just four individuals not on those two advancing teams.

Jersey will be represented at Salem by sophomore Bria Tuttle, who set the cut with her 94. McGivney’s Julia Stobie moves on with a 92. Salem’s Kenzie Anderson shot 84 and Centralia CORL’s Jianna Palm advanced at 92.