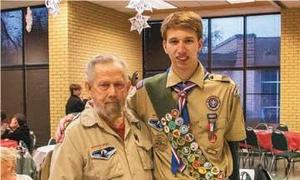 Did You Know: Only 4 percent of Scouts have earned this rank since the Boy Scouts’ inception in 1911. Congratulation William Roderfeld on achieving the highest rank in the Boy Scouts program.

William Roderfeld, a member of Boy Scout Troop 8007 in Godfrey, stands next to his scoutmaster, John Bridgeman.

William Roderfeld had reason to celebrate on Feb. 16.

“It means a lot to finally get it after many years of being in scouting,” Roderfeld said.

Roderfeld has been a member of the Boy Scouts of America program since he was in first grade. Since then, he has accomplished much — receiving the Arrow of Light Award when he was in the Cub Scouts, hiking the Philmont Scout Ranch rugged trek of 73 miles in Cimarron, N.M., in June 2019 and completing 42 merit badges.

“In a way, scouting is kind of nice,” Roderfeld said. “It opens you up to a bunch of different things that could upgrade your spark of interest in what you want to do later in life.”

Roderfeld received his Eagle Scout honor by installing three flagpoles with flags for St. Ambrose church and school in honor of the parish’s veterans. For the past few years, he helped his troop put up flags in Upper Alton on holidays.

“It kind of gave me an idea of what are some of my options of what I have to do for a project,” Roderfeld said. “So I went to the priest up at St. Ambrose (Father Steve Janoski). He said he would like to add a Vatican flag and wanted the flags to be more visible in front of the school in the lower parking lot. It’s just a matter of finding the spot where he can have them at.”

“What set me off was Mother Nature,” Roderfeld said. “It was not the greatest spring to be doing it. Now with this big epidemic (coronavirus) that’s hitting out, I’m happy that I got it done last summer.”

Roderfeld said his scoutmaster, John Bridgeman, has been helpful during the project.

“He’s a guy who is serious most of the time,” the Alton resident said. “Other times, you think he’s being serious and then he’ll turn around and gives you a nice little chuckle.”

A junior at Marquette Catholic High School, Roderfeld competes with the golf and bowling teams. He qualified for sectional competition in golf last fall and helped the boys bowling team advance to sectionals for the first time in program history last winter.

“It gives no time to be in trouble,” he said. “That’s the simplest way to put it. Between doing homework and sports and scouting, there’s no time where you’re really having a chance to be in trouble. The nice thing with that is you’re always out there doing something and keeping a clean record.”

Roderfeld said he’s considering a career in the engineering field.

“It’s an option right now,” he said. “I don’t have my mind fully set on what I want to do. It’s something that I have a little bit of interest in.”