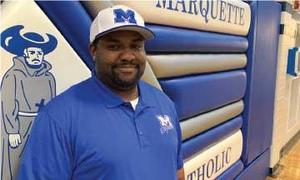 Coach McElrath has been named the new Marquette football coach. The former McCluer North football coach, was one of 20 applicants for the position. Coach Mac will also be joining the teaching staff as PE and Health instructor.

“I’m honored to be selected,” McElrath said. “Marquette has a strong football tradition and I can’t wait to get started.”

McElrath has been head coach at McCluer North High School in north St. Louis County the past two seasons.

“Coach Mac took over a McCluer North program that was 0-10 before he started,” Marquette AD Jack Holmes said. “He returned them to a 7-3 record in only two years and he comes highly recommended.”

“I believe we can do great things at Marquette,” McElrath said. “I’m looking forward to meeting the players already in the program and those in the school who might be interested in playing. Marquette has a great reputation for preparing kids for college.

“I’m a big believer in helping these players get to the next level, if that is something they want to do,” he said. “Our goal is to get the numbers up and get the underclassmen the experience they need to develop.

“We‘ll be disciplined and I like to play fast. This is a fun system to play in.”

“We were fortunate to have more than 20 applicants for the head coach opening,” said Andy Blasingim, the athletic chair of the Marquette Catholic Board of Directors. “We interviewed nine very qualified coaches, including several successful head coaches. The search committee was pleased to have so many well-qualified candidates who want to coach at Marquette. We believe we have found the right person to lead our football program for years to come.”

“McElrath will also teach PE and Health at Marquette.

“Having the head coach in the building was a major priority for us,” Holmes said.