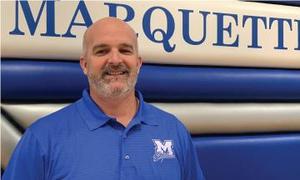 Congratulations to Brian Hoener, who was named Director of Athletics for Marquette Catholic. Mr. Hoener comes to MCHS from Fontbonne University, where he is currently the Assistant Director. He will begin his full-time duties at MCHS on July 1st. Marquette Catholic's current AD Jack Holmes, congratulates Brian Hoener, the incoming Athletic Director at the press release on January 14, 2020. Mr. Hoener will take over the reigns on July 1, 2020. Mr. Holmes retires this year, after serving as AD for 5 years.

Hoener will be next Marquette AD

Brian Hoener, who has been the Marquette Catholic High School girls soccer coach the past two seasons, will add the title of Marquette athletic director on July 1, replacing Jack Holmes, who is retiring.

ALTON — Since becoming a coach at Marquette Catholic, Brian Hoener discovered it is his kind of place.

Evidently, folks at MCHS like him being there as well.

Hoener, who’s been the girls soccer coach at Marquette since October of 2018, has been hired to become the next athletic director there, replacing Jack Holmes, who plans to retire. The announcement was made Tuesday.

“I’m so excited for this opportunity,” Hoener said. “I expressed interest when the position was announced and they reciprocated some of that interest. I’m very thankful it’s worked out.

“Through the experiences I’ve had in athletic administration at Fontbonne, I decided was a path I want to pursue. This is a good fit and the perfect chance.”

Hoener will officially assume his new duties as AD at Marquette on July 1.

“We are proud of our success in athletics at Marquette Catholic,” said Gerard Fischer, president of the Marquette Catholic High Board of Directors. “We believe Brian Hoener’s experience as a coach and administrator at the collegiate level will help us provide an even higher level experience to our student-athletes.”

Hoener, who is also the women’s head soccer coach and an assistant director at Fontbonne, will step down from those positions at the end of the current semester before assuming the Marquette post.

“My contract at Fontbonne runs out about the same time Jack’s does at Marquette,” Hoener said. “Since I’ll be there a lot anyway this spring for the girls soccer team, I’ll get the opportunity to come over this spring and pick Jack’s brain and maybe shadow him too.”

Hoener, 45, a former Lewis and Clark Community College soccer player, is a graduate of Fontbonne. He lives in Hazelwood, Missouri with his wife Julie, their three children with another child due in March.

“It’s about the same distance to my new job at Marquette as it is to Fontbonne,” said Hoener, who mentioned that he travelled across the old Clark Bridge many times when he was a student-athlete at Lewis and Clark.

“I remember crossing the old bridge every day,” Hoener said at the time. “I’m excited to have a new reason to cross it.”

Now, there’s an even bigger reason.

Hoener has served in a variety of other positions at Fontbonne, he was hired there originally as the men’s coach, a post he held for 11 years. He then added women’s soccer and coached both for four seasons, before moving to solely coaching the women’s team five years ago.

As the athletic director who’s also the coach of a sport at Marquette, Hoener is aware of the perception of a conflict of interest.

“We’ve talked about it,” Hoener said. “I’m conscious that there could be a perception of that. But I’ll be just as invested in the other sports as I will be in girls soccer. I’ll be an athetic director first and coach second. That’s my main focus.”

Hoener played for a pair of area soccer coaching legends in high school in junior college in McCluer North’s Ray Stahl and Tim Rooney at LCCC.

“Being trained by two coaching legends has helped me a lot,” Hoener said. “Coach Stahl and ‘Roons’ taught me the right way to play and coach the game.”

Hoener played at LCCC in 1991 and 1992. A forward, he was an “excellent player,” according to LCCC coach Tim Rooney.

“Brian was just a really good, solid player,” Rooney said. “His work rate was great and he was extremely coachable.

“He carried that over to coaching, I think. He’s very good an recognizing his team’s talent and playing to it. He sees the game the right way. He’s very approachable by the players.”