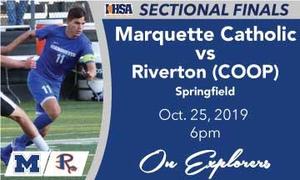 SPRINGFIELD – The Marquette Catholic Explorers boys soccer team played with a purpose from the start Tuesday night on the artificial turf at SHG.

Liftoff came just 15 seconds after kickoff and the Explorers controlled play from start to finish in a 4-0 victory over the Springfield SHG Cyclones in a Class 2A boys soccer sectional semifinal on the Cyclones home field.

The match’s opening sequence saw the Explorers’ Nick LaFata play a through ball with Boulch bursting past the Cyclones defense that Boulch settled and shot. SHG goalie John Phalen made the initial save, but Boulch got the rebound and did not miss.

“It just brings up the energy, a lot,” Boulch said of the immediate 1-0 lead. “That just boosted our confidence, right off the bat.”

Marquette would lead 3-0 at halftime and earned a slot in Friday’s sectional championship match vs. Riverton (21-2-1), which advanced with a 3-0 victory over Teutopolis in Tuesday’s second semifinal.

“We want to just move on from this game,” said Boulch, who tacked on a second goal later in the first half to push his season total to a team-leading 20, “and be ready for Friday.”

Marquette improves to 16-3-5. SHG, which matches the Explorers’ pedigree as a two-time state champion, closes at 14-8-1.

“I think we were a little tight,” said SHG coach Mike Lindsey, whose team lost to Marquette 4-1 in the super-sectional on the Explorers’ path to a Class 1A state championship in 2017. “And it showed. It’s not that we weren’t ready to play – there was so much hype for this game – but that’s a terrible way to kick off.”

The Cyclones never recovered from Boulch’s early strike. Luke Atkinson put the Explorers up 2-0 on an assist from Brett Terry in the 20th minute. And a minute later, Boulch scored again to stake Marquette to a 3-0 lead it would take to halftime.

“We just weren’t playing,” Lindsey said. “We knocked the ball around better than that. We were playing scared. We weren’t hustling. We were getting outworked.”

Lindsey did find some hope in the moments when the Cyclones tested Marquette goalie Joe Guehlstorf and the prospect of a second-half wind at their back.

“At times in the first half, when we did get the ball down and we knocked it around, it was a pretty even game,” Lindsey said. “But you mess up and it seems to compound once you make that first mistake – especially that early – and then it’s in your head. Then, you’re battling that the rest of the day.”

SHG’s best scoring chances came in the second half, but Guehlstorf was up to the task while finishing with six saves. And the Explorers’ quashed Cyclone comeback hopes when LaFata scored off an assist from Atkinson, who played Justin Atkinson’s direct kick to the end line left of the goal after a SHG handball.

“We’re not super concerned all the time about the score line, because we’ve played really well when we’re trailing 2-0 at half,” Gould said. “It’s nice to go up 3-0 at half. Truthfully, the goal in the second half maybe sealed it a little more.”

Both Marquette and SHG are in Class 1A after finding less success in Class 2A assignments. The Explorers were in 2A for four of the last five seasons – winning the 1A state title in 2017 – with one regional title. Since soccer’s expansion to three classes in 2008, SHG was without a regional title from nine years in 2A before winning a 1A sectional in 2017 in its first year on the drop.

But against Marquette, SHG spent much of the match on its home turf a step behind the Explorers.

“I knew about their speed,” Lindsey said. “But it’s hard to contain and handle speed. … It wasn’t anything different than what I expected. I just didn’t expect my team to make the mistakes that they did.”