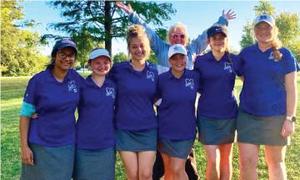 “It is, honestly, unbelievable,” said Kratschmer, who shot 87 in her first round at state last season... “ I don’t have another word to describe it other than incredible.”

Update:  Piar and Cain advance to second day rounds.  Team ends first day in 9th place missing the second round as a team by 3 strokes.

Click here to read the full story reported by the Alton Telegraph.

Marquette Catholic’s Gracie Piar watches her shot off the tee on hole No. 18 on Monday at the Mount Carmel Class 1A Sectional at West Berwick golf course.

MOUNT CARMEL – It was a routine 76, just another day at the golf course for Gracie Piar.

It was the number put up by a teammate Monday at the Mount Carmel Class 1A Sectional that brought the biggest smile from the Explorers sophomore.

That was pretty much the consensus for the round posted by Kratschmer, an Explorers senior whose previous best-ever low round she recalled was “probably in the high 80s”

Kratschmer, coming off a 101 in the last week’s regional at Spencer T. Olin, trimmed as many as nine strokes off that standard to send Marquette back to the state tournament for a second year in a row for the first time in the program’s history.

“It is, honestly, unbelievable,” said Kratschmer, who shot 87 in her first round at state last season. “Coming from freshman year and being the new girl, super scared, never picking up a club before and being able to grow and learn from Deb, our coach, and everybody else on the team, I don’t have another word to describe it other than incredible.”

Behind Piar’s fourth-place score of 76 and Kratschmer’s fifth-place medal, the Explorers came in at 333 to finish runner-up behind the host Mount Carmel Golden Aces at 307 at West Berwick golf course. Effingham (341) claimed the third and final berth to next weekend’s Class 1A state tourney at Red Tail Run in Decatur.

Effinham St. Anthony (343) and Massac County (349) were victimized by Kratschmer’s performance that got a good start with a 41 on the front nine and a better finish with 37 on back.

“I tried to not get it in my head that, oh, I’m doing really well,” Kratschmer said. “I just kind of took it one hole at a time. That’s what my grandpa told me to do. The advice worked pretty well for me today.”

Marquette also counted an 84 from sophomore Audrey Cain and 95 from sophomore Clancy Maag. After making their only previous team trip to state in 2000, the Explorers are now going back-to-back.

“It was probably one of the best experiences that I’ve had throughout high school,” Kratschmer said of last year’s trip that saw her finish with a two-day total of 190. “Getting the opportunity to go again is just absolutely incredible.”

McLeansboro junior Kylee Vaughn was the medalist at West Berwick with a 73. Mount Carmel freshmen Madelyn Young and Lillian Gottman tied for runner-up at 74. Piar was on her way to a medalist round before her downhill birdie putt on 17 lipped out and led to a five-putt. Piar’s career has included a hole-in-one and eagle, but this was a first.

Piar regrouped for par on 18, but the day in the Explorers’ celebration belonged to Kratschmer.

“I was just kind of hoping to shoot better than regionals,” Kratschmer said of her dismal day in the rain at Olin. “My regional was not my best. I just came here realizing that this very well might be the last time I ever play for Marquette.”

Explorers coach Deb Walsh is among those happy to see Kratschmer’s last time ever to play for Marquette will come at state.

“I told her today, she’s a senior, that there’s only one person to play for today and that’s yourself,” Walsh said, “so go out and prove something. And she sure did. … She was so relaxed today and just played like I know she can play. It was just awesome to watch.”