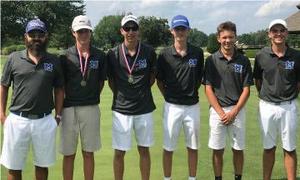 Will Roderfeld (Jr) and Aidan O'Keefe (Fr) came out strong for the Explorers in their first match of the season. Roderfeld and O'Keefe tied for 2nd Place in the Hickory Stick Classic. The team placed 4th overall. Marquette had finished second behind Hillsboro in each of the past two seasons and deemed fourth place a success after graduating its top talent from those two squads. The Explorers got two strong rounds from junior William Roderfeld and freshman Aidan O’Keefe. Both shot 77 to join Granite City’s Bennett Smallie in a three-way tie for second behind White.

Roderfeld and O'Keefe were only two strokes behind the leader, Alex Eickhoff from Hillsboro.  This year's Hickory Classic fielded 14 area teams and 66 golfers.

“Today was a pretty good day for us overall,” Explorers coach Ryan Geisler said. “I lost three really good seniors last year. I did get Aidan O’Keefe. He’s going to be an awesome addition to our team. And Will really worked hard over the summer and, obviously, will be one of our leaders this year.”