Players & Coaches of the Year 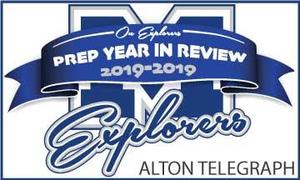 The 2018-19 season was a great year for all the EXPLORERS athletic teams! The annual PREP YEAR IN REVIEW honorees are being announced. Congratulations to those recognized by the Alton Telegraph. ALTON - “High school golf is a lot shorter, so I prepared myself by hitting a bunch of irons off the tee,” Piar said. “I didn’t hit too many drivers this year, because of how short the yardage is, and I practiced a lot on my short game as well.”

Piar recorded her second hole-in-one earlier this summer on the first hole at Spencer T. Olin in Alton. Her first career ace — at age 12 — also came at Olin on hole No. 5. ALTON — Marquette Catholic Explorers girls golf got back to state in 2018 for the first time since making its first trip in 2000.

That postseason journey began in Okawville with what Explorers coach Deb Walsh called “an incredible day for us.”

Marquette won its second Class 1A regional championship — the first came in 2016 — and survived the sectional in dramatic fashion to secure a state berth and earn Walsh recognition as the 2018 Telegraph Girls Golf Coach of the Year.
read more... ALTON — Sam Cogan took a half-hearted shot as explaining away the bloated scores from his first state tournament trip as a freshman with Marquette Catholic Explorers boys golf. ALTON — While Marquette Catholic’s 2018 season ended sooner than he expected, Chris Hartrich wouldn’t trade his senior year as an Explorer kicker for anything.

ALTON — Joe Burchett, the 2018 Small-Schools Boys Soccer Coach of the Year, made pretty efficient use of his time as head coach at Marquette Catholic High School.

In just two seasons, Burchett guided the Explorers to a 33-9-7 record and the 2017 Class 1A state championship. In 2018, the Explorers went 16-3-4, despite being moved up from Class 1A to Class 2A because of the IHSA success factor.
read more... Keep checking back for additional winners!