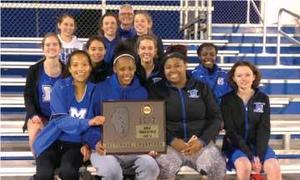 This year's girls track team is the first to cross the Sectional Finish Line for MCHS and the first Riverbend team to win sectionals since 1993. The Explorers qualified for 9 events in the Illinois State Meet and finished with 83 points in the Carlinville Class 1A Sectional Meet. The Explorers won their first sectional title in school history after coming out on top in the Class 1A Carlinville Sectional. Marquette finished first with 83 points and won the 15-team meet by 15 points over North Mac.

Marquette qualified for the Class 1A state meet in nine events and won sectional titles in three of them. The Alton school came into sectionals seeded in the top two in nine events.

Cutts, Fraley, Taylor and Kennedi Koetzle competed in the 4x100 and 4x200. Vickrey, Taylor, Nathaliah Buttry and Grace Dennis made up the 4x400 team.

Buttry finished fourth in the 400 and Kennedy Neal came in sixth in the shot put for the Explorers, who competed with just 10 athletes at sectionals.

Marquette became the first Riverbend school since Roxana in 1993 to win a sectional title in girls track.

The Class 1A state meet is scheduled for May 16 and 18 at Eastern Illinois University in Charleston. Vickrey will be competing at state for the third year in a row and Taylor, Koetzle and Cutts make their second appearances at Charleston.