Hitting Cancer Out of the Ballpark 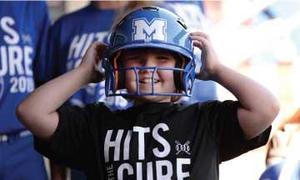 The MCHS softball team took another swing at fighting childhood cancer. This is the 2nd year the team has traveled to Peoria over prom weekend to participate in the "Hits for a Cure" fundraiser for St. Jude's Children's Cancer Research. There is still time to make a donation. https://pledgeit.org/for/hitsforthecure2019 When it comes to on-field lessons, Marquette Catholic High softball coach Dan Wiedman is somewhat of a professor.

Evidently, the Explorers players know a thing or two about what’s important off the field as well.

The Marquette spent prom weekend in Peoria. And even though they came up short in their three games of the Hits For The Cure tournament, they came home with a warm feeling, knowing they’d been involved in something bigger than softball. Bigger than themselves.

“It’s an awesome event in that not only do we get to play top-notch competition and play at one of the top sports facilities in the country,“ Wiedman said, “we also get to interact with children who are fighting cancer.”

The Hits For The Cure softball tourney was organized some three years ago by Chloe Peterson, a former standout first baseman at Peoria Notre Dame, who spent a good portion of the first six years of her life at St. Jude Children’s Research Hospital battling cancer. Peterson started the tournament to raise money for the fight to end childhood cancer.

The 13-game event featured some of the best prep softball teams in the central part of Illinois. On the field, things could have gone better for the Explorers, who went 0-3. While Marquette’s players and coaches would rather have three victories to add to the conversation, the lessons learned on and off the field are priceless.

One of the highlights, nay THE highlight, for the Explorers was getting to know 10-year-old Karly.

“The players were ecstatic to welcome Karly and make her feel like part of the team,” Wiedman said. “They took pictures with her, taught her some cheers and got together and autographed a softball for her to keep.

“Seeing these young kids fighting cancer and how brave they are puts things into perspective. Putting a smile on their faces makes it all worthwhile.”

Karly was diagnosed with acute lymphoblastic leukemia on Sept. 18, 2017. It was the beginning of a long journey for her and her family, one they’re still traveling.

“Within the first 10 minutes of that awful news we were faced with decisions and the main one was where would you like her to be treated?,” said Karly’s mother, April Rathbun. “Of course we wanted St. Jude's. It wasn’t long after that we met with a team of doctors who told us what the next three years would look like. The next morning, she got a port put in and received her first dose of chemotherapy. She stayed the next two months at St. Jude's, where she received chemo almost daily.”

“I got emotional for a little bit,” April Rathbun said. “She had just received her weekly chemotherapy not even an hour before we got there, so I was praying she would even feel up to it. So to see her not only smile, but to engage herself with the teams made my heart so happy.

“Karly always loves to be the center of attention but she’s old enough to understand why they were there. So the whole time, she kept saying, ‘I can’t believe all of these girls came out to support kids like me.’”

Wiedman wants to spread the word.

“When you hear comments like these, it makes you realize how much small deeds of kindness can have such an huge impact to people,” Wiedman said. “It makes me feel good and, again, so proud of our players.”

Hits for a Cure

It is the mission of Hits for the Cure to raise funds to fight and end childhood cancer through softball and baseball. Money raised will be specifically directed to the research and treatment of children fighting cancer. Intentional efforts will be made to support the fight against childhood cancer in the communities where the money has been raised.

To read more about this event or to make a donation check out the link below.