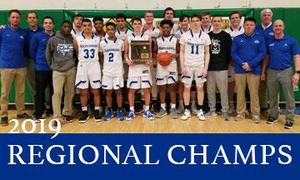 With a 44-40 victory against Greenville in the Southwestern Regionals, the boys basketball team moves onto the DeQuion High School Sectionals. Our Explorers play the Pinckneyville Panthers on Tuesday, February 26th at 7 PM. On Explorers!

Explorers hold off Comets for crown

1:02 am CST, Saturday, February 23, 2019
Photo: Greg Shashack | The Telegraph
Marquette Catholic’s student section dressed in white watches the Explorers’ Chris Hartrich get to the basket for a layup on a backdoor cut out of the Explorers offense midway through the fourth quarter

championship “an exclamation point on our season.”

Until his free throw with 5.5 seconds left gave the Explorers a two-possession lead, it had been a question mark.

Seniors Hemann and Chris Hartrich combined for 30 points to lead Marquette to a 44-40 boys basketball victory over the Greenville Comets in the title game of the Southwestern Class 2A Regional.

“This means everything for us,” Hemann said. “This team, coming into the season, we knew what we had. We knew the heart and we knew the energy we put into every game, every day. We proved it tonight and put an exclamation point on our season.”

The victory was the 13th straight for the Explorers, who take a 29-3 record to the DuQuoin Sectional for a Tuesday semifinal against Pinckneyville (26-5). Nashville (31-2), ranked No. 1 in the final Class 2A state poll, plays West Frankfort (21-10) in Wednesday’s semifinal.

It was a sweet celebration for the fifth-ranked Explorers, who were 29-0 last season when they were upset by Columbia in a Class 3A regional championship game.

“Last year, an incredible season ended way too early,” Hartrich said. “This year, we’re trying to get the extra step and do what we did my sophomore year and go to the super-sectional.”

Since 2010, Marquette has played in six Class 2A regionals and won all six. It is 1-for-4 in 3A regionals over that stretch.

Offense was a struggle early for both the Explorers and Comets. Greenville went more than seven minutes before making a field goal and trailed 10-6 after one quarter. Marquette’s lead was 16-8 when the Comets put together an 11-2 run capped by Isaac Green’s 3-pointer with 20 seconds left in the second quarter to give Greenville a 19-18 lead it took to halftime.

“We jumped out to an early lead, but you have to expect this in a regional game.” Hartrich said. “No one is going to go away. We just had to keep playing our way. Medford told us we were going to win this game, no matter what. We just had to believe in that. And we did.”

Marquette committed 15 turnovers, including 10 in the first half, and finished 0-for-9 from 3-point range. The Explorers also survived a 4 of 10 effort from the foul line in the final 1:18 to keep hope alive for Greenville.

“Maybe there’s something to winning a little ugly tonight and playing the way we did and still pulling it out,” Marquette coach Steve Medford said. “Our kids, they kept battling, they kept fighting. … They kind of got punched in the face tonight, but we survive and move on.”

Successive baskets from Hartrich, the second on a backdoor cut for an uncontested layup with 4:16 remaining in the fourth quarter, gave Marquette a five-point lead at 36-31.

The Comets were within three points when the Explorers ended a 100-second possession with two Hartrich free throws, followed by a steal that earned a possession that Hemann ended with a dunk to make the Marquette lead 40-33 with 1:52 left.

“I knew how good Marquette was,” Greenville coach Todd Cantrill said. “I talked to a lot of people and saw a lot of film. I knew they were good. But I told everybody that would talk to me, our kids will not back down, our kids are going to put up a great effort. I didn’t know if we could stay with them or not. But our kids are certainly not going to back down from anybody and I loved their effort tonight and what they were able to accomplish.”

With Hartrich twice missing the front end of a one-and-one, a deep, high arcing 3 from Brock Nelson drew the Comets within 42-40 with 28 seconds left. After Hartrich converted one of two free throws to make it 43-40 with 24 seconds left, Greenville got a good look on a top of the key 3 from Green that would not fall and Hemann was fouled on the rebound.

“It was a play that we’ve run in practice, we’ve actually never run in a game,” Cantrill said. “It gives us a couple looks to get a 3 and it was right there for us. It hung on the rim a little bit, we thought it might fall in. But give Marquette a lot of credit. They are very good defensively.”

Chad Stearns scored 15 points and Green finished with 12 for the Comets, who close at 18-13 after winning a second successive South Central Conference championship. Greenville has won 22 straight SCC games and is 51-3 in league play while winning titles in five of the past six seasons.

But Marquette, which went 25-1 against SCC foes while winning West Division titles in its final two seasons as a member before being evicted from the SCC in 2012, denied the Comets their first regional title since 2015.

“Todd Cantrill does a great job, he’s a good coach,” Medford said. “When we were in that conference, I always thought he did a really good job. His kids play defense, they play hard. Their kids were quicker tonight than I’ve seen them in the past, watching them on film, watching them in person. They were quick and they played hard.

“You can say we did this and we did that. But at the end of the day, you’ve got to credit Greenville and the way they defended us tonight. They did a great job.”