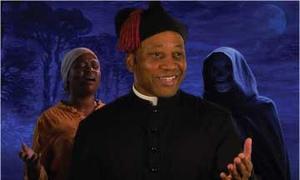 "A colored child born April 1, 1854, son of Peter Tolton and Martha Chisley, property of Stephen Elliott."  Those were the words written in the baptismal record for Father Augustus Tolton. Born a slave in Brush Creek, Mo., he grew up to become the first African-American Catholic priest. He bore the insults of racial prejudice, and even after his ordination suffered the jealousies of religious leaders, both Catholic and Protestant, who saw him as a threat to their congregations.

Last year, Deacon Bill Kessler of St. Ambrose in Godfrey, saw Father Tolton’s story presented in Granite City. He resolved to bring this story to the people of the Riverbend Area by means of the St. Serra Vocations Club of Madison County.  Another audience member, Father Jeremy Paulin, OMV, of St. Mary Parish in Alton, also wanted to bring it to his parish.  They later met with the St. Serra Vocations Club, Marquette Catholic High School, and other area priests and parishes and worked together to bring three performances of Father Tolton’s story to one venue, where people from the Riverbend area are invited to see the story. (One performance will be private for area students, the other two are open to the public.)

Deacon Kessler said, “Our St. Serra Vocations Club promotes vocations at both our parish schools and our Marquette Catholic High School.  The play on the life of Father Tolton uniquely presents his faithful story.  To have the performance during the annual Catholic Schools Week will allow almost 1,000 of our school community to be inspired by his life and fidelity.  The fidelity of Augustus Tolton speaks to all, no matter one’s age, to be encouraged in our response to God’s call to faithful Discipleship in the single life or family vocations.”

Tolton:  From Slave to Priest is sure to have a powerful impact on all who experience it.  From his dramatic escape from slavery to his courageous struggle in the face of prejudice, Father Tolton’s life centers around his message of reconciliation and hope which is both a message for his time and our own. This live production is performed by actor Jim Coleman.

This show performed by Saint Luke's Productions is brought to us by The Catholic parishes of the River Bend Community, the St. Serra Vocations Club of Madison County, and Marquette Catholic High School.