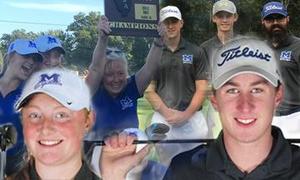 Marquette golf program firing on all cylinders; sweep Player and Coach of the Year honors.
With tournament championships, regional championships and recent trips to the State Finals - the Marquette boys and girls golf programs are firing on all cylinders. Well-known instructor Jim Rohan has been added as Swing Coach and now the Explorers have swept Player and Coach of the Year honors.
By Theo Tate, Advantage News

Gracie Piar’s freshman season with the Marquette Catholic girls golf team got off to a sizzling start Aug. 14 at the Madison County Tournament at the Legacy Golf Course.

“It’s great,” Piar said. “I didn’t think it was possible for a freshman.”

Piar’s season took off from there. She was the Explorers’ top golfer with a 39.7 average and helped the Alton school win a regional championship and place fifth in the Class A state tournament at Red Tail Run Golf Course in Decatur.

“I liked it a lot because it’s my first year, and I know I have many more years to try to get to state and win regionals again,” the freshman said.

Piar had plenty of golf experience before joining the Explorers in August. She was named the Gateway PGA Player of the Year in the last two years in the age 12-14 division, shot a hole in one in ‘16 and competed in tournaments across the country, including Cincinnati, Ohio, Palm Springs, Calif., and Burlington, Iowa.

“I’ve been playing golf for a while, so it’s always fun,” Piar said. “But this summer was one of the biggest summers I’ve had because I’ve traveled all over and played.”

Among the tournaments Piar played in this summer were the Women’s Western Amateur tournament in Cincinnati, the Little People’s tournament in Quincy, the Future Collegians World Tour in Palm Springs, and the Cobra-Puma Cup in Burlington.

“It was fun traveling because I got to play all new courses and see new people play,” Piar said. “It really helped me because I played with different people and I saw what they did.”

Piar has been playing golf since she was 7. She began competing in tournaments three years later.

The freshman said her father, Jarrod, influenced her to start playing golf.

“I like it because it’s an individual sport,” she said. “I know in high school, it’s a team sport. I like individual sports because you don’t have to count on people to show up. You just go out and play.”

Piar helped Marquette capture its second regional title in three years as the Explorers won the Okawville Regional by 16 strokes on Oct. 3. Five days later, Marquette clinched its first state berth in 18 years with a third-place finish at the Centralia Sectional.

Piar was the Explorers’ top finisher at state, shooting a 165 with 16 pars and 3 birdies under chilly conditions.

“It’s determination,” said Piar, who shot a 78 in regionals and an 80 in sectionals. “You’re going up against tough kids. You just have to play your best.”

Piar played on a Marquette team that included freshmen Audrey Cain and Clancy Maag, juniors Annie Kane and Katy Kratschmer and sophomore Cat Hollis. Piar played in tournaments with Cain during the summer.

Golf may not have swept Marquette senior Sam Cogan off his feet, but the player and the sport do have a love affair.

Cogan went from the No. 6 golfer on varsity as a freshman to No. 2 as a senior and the last Explorer standing at the Class 2A state tournament. The long-hitting senior finished in a tie for 12th at Weibring Golf Course in Normal on Oct. 13, wrapping up his career on a high note.

The success of his senior season has given him a new perspective on golf.

“Some of my teammates over the years thought with a little more practice I could play college golf,” Cogan said. “I told them, ‘You’re crazy, I don’t want to play golf. I’m playing baseball.’ But now that I’ve gotten better, progressed and had motivation to practice, I’m thinking golf is for me. In the course of the last year, I’ve grown to like golf a lot more.”

Playing with guys golfing in college like Michael Holtz, Nick Messinger and Jack Patterson helped prepare him for this season.

“Nick and Michael were hard on me, especially because they knew I didn’t play a lot of golf, but they told me I had a lot of potential,” he said. “I never really believed them, but once I got to junior and senior year I started to see it. They are the ones that got me to practice a lot more and got my game to where it is today, along with the help of Jim (Rowan).”

Rowan, a local golf instructor, has been a huge influence on the whole Marquette program.

“He’s helped me, Jack Warren, even Kolten (Bauer) tremendously,” Cogan said. “Sometimes we think we have a flaw in our swing, but he’ll come in and say, ‘Do this.’ It’s amazing how he can pick something out in your swing. He’ll say, ‘Use a little less hand on that.’ And it will go straight every time and it’s like ‘How?’ It’s an amazing help he has on our team.”

Always long from the tees, it was the evolution of Cogan’s short game that really helped him.

“I’ve gotten a lot more consistent with my driver,” he said. “My short game was a huge help this year. I know more toward the end of the season my short game came around, and I was a lot more happy with it.”

He began the year with a second-place finish in the Hickory Stick Invite and went onto a solid regular season. When the postseason hit, he really buckled down.

Cogan led the Explorers with a 73 at the Jacksonville Regional, good for second overall and just a stroke off the medalist. At the Carbondale Sectional he carded a 75, just three strokes off the leader.

That was also good enough to be the only Explorer to qualify for state.

Because of a snowstorm whipping through Normal, state was just one day. Cogan shot 77 to tie for 12th. That came a day after he played eight holes in three hours of snow before it was canceled.

His final hole at the sectional served as the ultimate confidence booster.

“My drive went into the trees and I was between two roots,” he said. “I had about six inches of room I could go. I looked at coach (Ryan Geisler) and he didn’t know what to do. Jim was like, ‘Just try it.’ I got it out and looked at coach and Jim and smiled. I got up to the green and was able to get par. That was the best moment of my senior year. I knew I had a chance to go to state then.”

Geisler’s second season with the Marquette Explorers saw them advance to a Class 2A sectional and qualify an individual linkster to state for the second time.

The Explorers finished second at the Jacksonville Regional, carding a 323 as a team to advance to the Carbondale Sectional where they placed ninth, ending their season as a team.

Senior Sam Cogan was the lone Marquette boys golfer to advance to state, where he finished tied for 12th place with a 77 after the tournament was cut to one day due to snow.

During the season the Explorers enjoyed a repeat performance as small-school division Madison County champs under Geisler, carding a 321 at Belk Park Golf Course. Senior Kolten Bauer shot a 4-under-68 to earn medalist honors. Marquette was also second in the small-school division of the Dick Gerber Invitational at Oak Brook Golf Course in Edwardsville. The Explorers tied Althoff with a 314, but lost on a scorecard playoff to take second.

Walsh enjoyed the best season of her seven-year coaching career with the Marquette girls golf team, guiding the team to Madison County small-school division and Class A Okawville Regional championships and a fifth-place finish at the state tournament at Red Tail Run Golf Course in Decatur.

Marquette qualified for state for the first time since 2000 after finishing third in the Centralia Sectional tournament. The Explorers also placed third in the Marquette Blast-Off Classic and lost only one match in dual action.

Walsh has been Marquette coach since 2012. Before this year, she had coached three individuals to a trip to the state tournament.