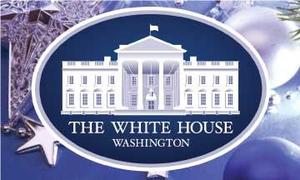 Cecilia Egdorf, MCHS Class of '78, spent a week in Washington D.C. decorating the White House for Christmas. Cecilia, the owner of a landscape business in Bigfork, Montana said, "It was a surreal experience." Having a “white” Christmas took on a new meaning for Bigfork resident Cecilia Egdorf this year when she recently traveled to Washington, D.C., to help deck the halls of the White House.

Egdorf, 58, a landscaper and holiday decorator, happened upon the volunteer application online in August and decided to throw her name in the hat for the chance to take her skills to the national stage. A call came in October, notifying her that she’d been selected to take part in an annual tradition spanning many presidential administrations.

Together with a designer from Chicago, Melania put together plans for this year’s American Treasures-themed decor. Out of more than 7,000 applications from hopeful decorators, between 150 and 225 volunteers were selected from across the United States to bring the designs to life.

Upon her arrival in the capitol, Egdorf spent Thanksgiving Day sightseeing, taking in various museums, monuments and memorials before the work began that evening.

Each workday began with multiple layers of security checks, requiring volunteers present their IDs and submit to procedures similar to airport security, according to Egdorf.

With a green light from security, the volunteers separated into groups to work on individual rooms, each with a different theme.

Teams received basic instructions about the design of each room and the decorations they were to use, but they were left some creative freedom with how they put it all together, Egdorf said.

“One of the things I was kind of concerned about was I am very, very particular when I decorate,” Egdorf said. “The lead designer said this is not about speed. This is about perfection. We don’t want you to rush through this.”

Equally ornate trees and decor adorned the grand foyer and cross hall in glittering shades of red and the state dining room in elegant whites. The green room represented American agriculture and was decorated with produce and other natural items.

The Gold Star tree decorated by volunteers who have lost loved ones in the military struck a personal note for Egdorf, whose son, Jordan Egdorf, 21, of the U.S. Marine Corps, is currently stationed in Okinawa, Japan.

Her ties to the military and her lifelong love of decorating inspired by her family combined to make Egdorf’s time in America’s home extra special.

“I’m all about the sparkle and the glitter and the glitz,” Egdorf said. “It was just that kind of magical part of Christmas that has just sort of stuck with me and then to see it on the biggest stage ever and be part of it, that’s very, very interesting.”

Completing the entire ensemble required around 20,000 feet of lights, 12,000 bows and thousands upon thousands of unique and delicate ornaments.

The gravity of the historic space in which they worked escaped none of the volunteers, she said, whether they were climbing a 14-foot ladder to top a tree or sweeping up behind each other.

“Everyone was just honored to be there, no matter what you did,” Egdorf said.

Though she praised the organization and efficiency of the people involved in the project, Egdorf said her experience came with a minor memorable mishap, as well.

While cleaning up on the last day of decoration, Egdorf carried a large empty box out the front door on the porch of the White House. While struggling to get the box through the door made of thick, heavy glass, it swung shut, pinning her and the box against the door frame.

A nearby Secret Service member helped free her without injury, and she laughed at the thought of getting stuck in such a historic spot.

One special highlight came toward the end of her time as a volunteer, when Egdorf caught a glimpse of President Donald Trump himself crossing the yard to board Marine One, destined for a rally in Mississippi.

Upon the completion of all the decorations, Egdorf’s role changed from volunteer to guest for Monday’s reception in their honor.

That evening, she and the other volunteers got their first glimpse of the fully decorated White House in all its glory, fully furnished and garnished with floral arrangements and tables of decadent foods.

According to Egdorf, word had gotten out that the East Room, which she’d helped decorate, was Melania Trump’s favorite.

“We were so proud of everything we’d done and honored to be in that spot,” Egdorf said. “It was beautiful, and just to know that she said that was icing on the cake, basically.”

The first lady made an appearance at the party with a brief address, thanking the volunteers for their hard work in person before retiring upstairs.

“I don’t know what more could have happened to make it any more special,” Egdorf said. “Everything just fell into place.”

“It was a major adventure, and one that I’m honored to have been part of,” she added.

Reporter Mary Cloud Taylor can be reached at 758-4459 or mtaylor@dailyinterlake.com.