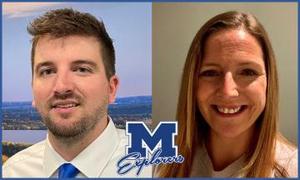 The Marquette Catholic Athletic Office is excited to announce that Cody Best and Whitney Sykes-Rogers will take over the reigns as head boys and girls basketball, respectively. On Explorers!

It's Best of times for new Marquette coach

ALTON – Nineteen victories and a regional championship from a season that had one senior among the team’s top seven players had Parker Macias excited for his final year with Marquette boys basketball.

That excitement was dulled on May 18 when coach Steve Medford told his Explorers that he would not be returning for his 13th season at Marquette.

“It was tough for me, personally,” Macias said. “We had a lot of guys coming back and I thought we would have a big year and go far. I still believe that. Best of luck to coach Medford, he’s a great guy and I respect him a lot. He helped me a lot in my basketball career and I have nothing but respect for him. It’s his decision, not mine. But it was pretty hard.”

Five Wednesdays after Medford met with his team for the final time, the Explorers met their new coach. And three days after Cody Best was introduced as Marquette’s 15th coach in 66 boys basketball seasons, Macias and his teammates were excited again.

“He’s a really good guy and he knows what he’s talking about,” Macias said of Best. “It will be fun. Medford was a great coach, you can’t really compare anyone to him, he made his mark. This is coach Best’s first big head coaching job and I think he’s done a really good job so far. I’m excited to see what we do during the season.”

In the last of 110 games in the three-day, 57-school Edwardsville NCAA Live Showcase on Sunday afternoon, Marquette pounded Cahokia 70-33 after beating McCluer 34-30 earlier in the day to cap a strong first impression for coach and team.

For the 31-year-old Best, getting on the court with the Explorers was a welcome result from a five-week whirlwind that brought him from longshot applicant to landing the Marquette job.

“I honestly didn’t think it was realistic for me to get it,” Best said, wearing a Marquette-blue tie with a white dress shirt last Wednesday night before meeting his team at Marquette. “I applied, had a couple interviews and now I’m sitting here. It’s pretty crazy.”

This is a crazy good opportunity for Best, who was an All-SCC East Division athlete in basketball and football with the Staunton Bulldogs before graduating in 2009. Best will not be a teacher at Marquette – neither was Medford – and will continue his job managing logistics for a construction company based in Caseyville.

Best has head coaching experience gleaned from three years at Mount Olive, where his first season brought a 16-13 record that halted the program's streak of losing seasons at 13 in a row. The Wildcats reverted to the mean with records at 5-21 and 4-23 in Best’s final two seasons.

“I definitely had to get my foot in the door, start somewhere,” Best said of his challenging stint at Mount Olive. “Small school, you’re not going to get a lot of numbers. You’re playing teams that just reload every year and it got tough. I stuck it out for three years. I got that experience and I’m glad I did.”

With Marquette, Best inherits a program much better positioned for success, with 20 victories and a regional title becoming the norm in Medford’s dozen seasons. Best credits his two seasons as an assistant coach with the Highland Bulldogs for prepping him for the task now at hand.

“I wanted to go to a bigger school, kind of learn from somebody,” Best said. “I got the opportunity at Highland and was there for two years.”

When Highland head coach Deryl Cunningham was convalescing from a Dec. 1 kidney replacement last season, Best stepped in as interim coach for the Bulldogs for 13 games. He went 6-7 in that stretch with a team that finished 14-17.

“Learned how to run a bigger program – varsity team, JV team, freshman team – being involved with the parents and all that,” Best said of his two seasons at Highland. “It was definitely a big step, going up against 3A schools every night, sometimes 4A schools. It took a lot of learning. Being with the freshman, and developing them, helped me. It was fun.”

It also reconfirmed Best’s desire to again be the coach that gets to stand on the sideline rather than sit.

“I knew I wanted to have my own program, running what I want to run,” Best said. “That’s when I started to think I could make a move like this.”

How much different the Explorers look on the court under Best will be seen in November.

“Whatever offenses he sets in, I think we’ll do a really good job transitioning,” Macias said. “We’ve got a lot of scorers on our team and I think it will be fun to learn some new tricks.”

Princeton offense may be gone. And Best is more familiar with zone defense than the aggressive man-to-man that became the team's trademark under Medford. But Best is willing to adjust to what best suits a roster returning four starters in seniors Macias, Kendall Lavender, Brody Hendricks and junior Braden Kline, with experienced seniors Dre Davis and Jack Spain also back. And juniors Jaden Rochester and Brody Bechtold showed Sunday they will be in play for significant roles.

“Don’t want to give all my secrets away,” Best said of his attack plans. “They won 19 games and they bring back six of their top seven. I would be crazy to absolutely change everything. Ever since I got the call, I watched film from last year and they play so well and they play so tough. That’s what I want my team to be.”

Best had a winning experience as a prep player at Staunton under coach Steve Moore. The Dogs went 21-10 and won a regional title in Best’s senior season.

“He’s had a big impact through my whole coaching career,” Best said of Moore. “He was big on the 1-3-1 (zone). I’ve kind of done that everywhere I’ve been. He’s one of those player’s coaches, he’s not going to sit there and yell at you non-stop. That’s kind of how I’ve been. I’m not going to yell at the guys every practice.”

He then adds, with a smile, “I want to get to know them first.”

Yelling from the bench was not non-stop with Medford, but he was a high-intensity, high-energy, high-volume coach. That’s not Best, who will offer fewer photo opportunities from the sideline.

Best said he spoke with Medford recently and that communication topic came up.

“He mentioned that’s going to be a change for them,” Best said with a laugh.

Mention of that change also brought a smile from Macias, who had many of those one-way exchanges with Medford as the Explorers’ point guard.

“It’s going to be a little bit of a change. Maybe not as stressful,” Macias said. “But Medford always got the most out of us. Sometimes, that’s what we needed.”

Some coaching stability remains with Best retaining Brad Kline as an assistant. Best is in the process of filling out his staff.

“I haven’t reached out to anybody yet,” Best said. “I have a couple people I would ask. We’ll see how their schedule is and go from there.”

At 12 seasons, Medford had the longest tenure of any coach for Marquette boys basketball. Only Tom Scyoc (1976-83) stayed in the job as long as seven seasons before Medford.

Best hopes for his own long run with the Explorers.

“That’s what the plan is, as long as they want me,” he said. “It’s an elite program and elite school and I’m happy to be a part of it.”

“We think Coach Sykes-Rogers will continue to do a great job here at Marquette and are thrilled to welcome her as a head coach,” Marquette Athletic Director Brian Hoener said. “Her experience in our program and knowledge of the roster will serve as an asset for a smooth transition. We feel Coach Sykes-Rogers will continue the tradition of success on and off the court for our Explorers program.”

Prior to Marquette, Sykes-Rodgers spent seven years as a head coach at Granite City High School. She played collegiately at SIUE where she ranks in the top ten in scoring and is the all-time leader in three-pointers for a career, season, and game.

“I am honored to be taking over at Marquette Catholic,” said Coach Sykes-Rogers. “I look forward to the challenge and opportunity to build on the tremendous traditions of the Explorers and can’t wait to get started.”