Harris Signs his Letter of Intent 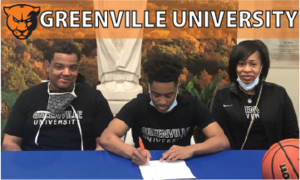 Congratulations to Cortez Harris! Surrounded by family, coaches, and teammates, Harris signed his letter of intent to play basketball for the Greenville Panthers next fall. Cortez plans on continuing his education studying Criminal Justice. Harris will study criminal justice at Greenville. He chose Greenville University so he would have the opportunity to play at the next level.

In the 2019-20 season, the Explorers' point guard averaged 6.5 points, 2.8 rebounds, 4.3 assists, and 4.2 steals per game, as Harris helped Marquette to a 26-7 season, climaxing in another appearance in the IHSA Class 2A Sweet Sixteen in the sectional final.

Harris also participated in the Explorer football and track programs and received recognition as Athlete of the Month.

Cortez Harris with his parents, Cortez and Chantey Harris