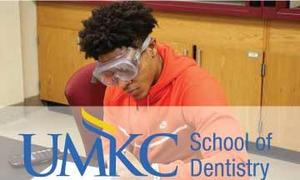 MCHS standout scholar and athlete, Shandon Boone, Class of 2016, declared his desire to go to dental school while a senior at Marquette. Shandon has been accepted to the dental program at the University of Missouri-Kansas City for fall 2020.

Shandon Boone came to Avila University with a plan: study hard, play basketball and get into dental school. After recently learning he had been accepted into the dental school at the University of Missouri, Kansas City for fall 2020, he’s exactly where he wanted to be when he stepped onto campus in 2016.

“I knew I wanted to become a dentist when I was a senior in high school, which helped narrow down the schools I was considering,” said Boone, who hails from St. Louis. “The first time I came across Avila was when the basketball team began recruiting me. When I went on my tour I had a good feeling about the school, especially the fit with the basketball team and the science programs being offered.”

Having clarity before entering the classroom meant Boone already had a step up on his peers. It also meant he could research and investigate Avila thoroughly before making his decision to ensure it met his demands.

“Before I visited, I did my own research to make sure that it seemed like a good school for me,” he said. “Then when I visited, everyone on campus was open and willing to talk. The people I met with on my visit were especially transparent about what my experience would be like on campus. Because of that transparency, I had an accurate sense of what it would be mean to attend Avila.”

Avila has lived up to the expectations he set on his first visit, according to Boone. Between rigorous coursework in his major and the knowledge and wisdom provided by Stephen Daggett, Ph.D., professor of biology and Chief Prehealth Advisor, and Chad Cooley, Ph.D., assistant professor of chemistry. Boone said he especially leaned on the former during the application process, which aided in his being accepted into every program he applied to.

“My coursework at Avila in my program was tough enough that I felt like I was already in dental school,” Boone said. “On top of that, Avila offers all the pre-requisites I needed to get into dental school so I didn’t have to worry about that. Avila has been a perfect school for me to pursue my career.

“Whenever I was unsure about something in class or in the graduate school application process, Dr. Daggett had the information I needed. He helped me throughout the application process and he was kind enough to write one of my letters of recommendation. He was a great person to go to whenever I had questions.”

From the day he stepped on campus, Daggett noted Boone’s preparedness and professionalism.

“Shandon is focused. Not only is he driven and has the discipline necessary to complete work, he’s an outstanding listener asks excellent questions,” Daggett said. “Shandon set goals and a timeline from day one and has accomplished those goals through hard work and perseverance.”

In his preparations for dental school, Boone said he knows he will need to rely on that work ethic to succeed. However, he knows that as he increasingly focuses on his chosen field he’ll be ready to face any challenges he may encounter.

“I know dental school is going to be tough, but I feel prepared and ready to adapt,” Boone said. ” I love school and basketball and I really love learning. Going to Avila let me do all three things that I love doing. Now that I’ll be focusing on just dental school, I know I’ll be able to adapt and maintain the standards I set for myself.”