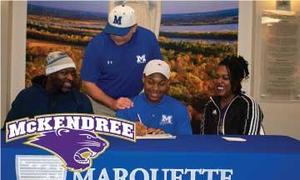 The celebration for Iggy was a big one, with lots of friends from school, teammates, coaches, and family around to witness the big sign-on moment. After the signing and many pictures, Iggy was met with many people waiting for the chance to shake his hand. It was clear he has a lot of support surrounding him.

“I am really excited. This is huge, I am so happy for the amount of people that came out for this moment,” said McGee.

The cheering crowd made the moment more exciting, as McGee signed on to McKendree University. His parents Kwame and Aja McGee were right next to him, proudly celebrating their son's accomplishments.

“I only played football here for a year, I’m really happy to have seen those efforts playing pay off in such an important way, though,” said McGee.

McGee played basketball all four of his High School years. During his football career, he was selected as running back for the Prairie State All-Conference team. McGee was also named Student of the Month late last year. As far as his plans after graduating from Marquette Catholic High School in the spring, he is excited about what the future holds.

“I am of course very excited to move on to playing at a college level. I’m still undecided on a major, but I am very happy to be attending McKendree,” said McGee.

McKendree University is located in Lebanon, Illinois, founded in 1828, the school enrolls over 2,300 undergraduates and 700 graduates.