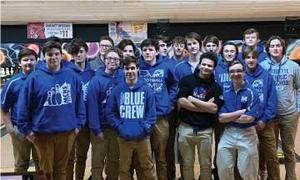 Congratulations to Coach Mark Jones and his team on a great season. The Explorer bowling program made its debut 4 years ago and continues to grow and improve. William Roderfeld celebrates with his Marquette Catholic boys bowling teammates after bowling a strike in the third game of the Jersey Regional on Saturday. The Explorers placed third in regionals to qualify for the Collinsville Sectional next week.

The Explorers qualified for sectional competition as a team for the first time in their four-year history after finishing third in the Jersey Regional on Saturday at Tri-County Bowl in Jerseyville. Marquette finished with a six-game score of 5,823 to advance to the Collinsville Sectional, scheduled for Jan. 25 at Camelot Bowl.

The Explorers started their bowling program in 2016. They had a total of two individual sectional qualifiers (Luke Simmons in 2018 and Sam Cogan in '18 and '19) in the last two years.

Junior Patrick Wiemers was Marquette's top finisher, placing fifth with a 1,275. Senior Jake Gatermann, who was in second place at one point, finished eighth with a 1,253. William Roderfeld, who was a sectional qualifier in golf last fall, shot an 1,126, Joey Gatermann bowled a 1,098 and Nick Hamm finished with a 1,071.

ALTON - Junior William Roderfeld has become one of the top bowlers for Marquette Catholic High School, having increased his average by 21 pins, from a 164 average to a 185, helping lead the Explorers to the IHSA sectional tournament in Collinsville.

For that, and many other accomplishments, Roderfeld has been named the Riverbender.com male Athlete of the Month for January 2020.

Roderfeld's biggest moment of the season so far came in a dual meet against Metro-East Lutheran, where he rolled a 636 series, the team's highest series to date this year, in helping the Explorers go on to the win.

Roderfeld, who bowls for head coach Mark Jones, has been bowling for Marquette for two years and enjoys the competition of the sport, along with the teamwork.

"You're a part of a team, but you still have to perform on your own," Roderfeld said.

He credits his hard work and dedication to bowling as a reason that he's improved on the lanes this season.

"With dedication and practicing on my own," Roderfeld said, "I have become consistent with my throws, which has allowed me to be on the end of the varsity lineup to help close out tight matches."

Roderfeld thanked his coach for his assistance and guidance into helping him become a better bowler.

"I would like to thank my coach for helping me get into this position," Roderfeld said, "and with helping me how to read the oil on the lanes, and making moves."

Roderfeld is also a member of the Explorers' golf and boys volleyball teams, along with being a member of the bass fishing team, and credits being on the golf team with helping him how to make decisions and shots on his own.

"With playing high school golf, I have learned not to rely on others to help me," Roderfeld said, "by having to make shots and decisions on my own, where with a team sport if you're not on your game, you have others to help you get through it."

Roderfeld is also planning on attending college, but hasn't yet decided on which school he'll go to. He does have some ideas for majors, but he's yet to decide on one.

Riverbender.com's Athlete of the Month program is made possible by the generosity of our sponsors and the cooperation of our area high schools. This is a great accomplishment, and one to be very proud of. Please join us in congratulating this young athlete. We at Riverbender.com wish you continued success in your future!

Subscribe to our Podcast and listen to today's headlines.