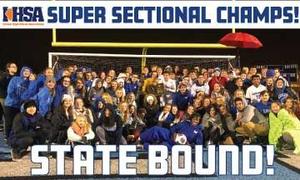 A 2-1 victory against Columbia sends the Explorers to the State semi-finals. Game time is 7pm Friday, November 1 at the Eastside Centre located at 1 Eastside Dr, East Peoria, IL 61611. The Explorers are slated to play Quincy Notre Dame.

Marquette Catholic’s Noah McClintock (6) puts a shot high over the crossbar after beating Columbia’s Aaron Rahn to the ball in the first half Tuesday night at the Breese Mater Dei Class 1A Super-Sectional.

That scoreless streak did not survive 80 seconds Tuesday night, but the Explorers recovered to beat the Columbia Eagles 2-1 in the Breese Mater Dei Class 1A Super-Sectional.

“That was unexpected,” Marquette coach Tim Gould said of the quick 1-0 deficit on an own goal. “But I think you could see it in their reaction, from everyone on the field and everyone on the bench. We weren’t down on ourselves, by any stretch. They looked at each other and said, let’s get going.”

The Explorers got going with two first-half goals and withstood multiple second-half threats from the Eagles to punch their ticket to the Class 1A state tournament Friday and Saturday at EastSide Centre in East Peoria.

The Explorers had outscored four regional and sectional opponents 20-0 before Columbia’s Tate Schilling skipped a hard shot off the artificial turf at Mater Dei that hit a Marquette defender and found the back of the net. Columbia came in with a 20-1 scoring edge in the playoffs.

“Conditions were rough, it was wet,” Marquette goalie Joe Guehlstorf said. “Ball’s hit hard, it takes a weird deflection off my own player. It was poor communication. But the boys got back together and we countered really well.”

This was the season’s third matchup between Marquette and Columbia, with the teams tying 1-1 on Sept. 2 in Alton and the Explorers rallying from a 2-0 halftime deficit to win 3-2 Sept. 30 in the CYC Tourney in Fenton, Mo. So, an immediate 1-0 deficit left the Explorers undaunted.

“We trailed against Triad, we trailed against Rochester, against O’Fallon, Columbia twice now,” Gould recounted. “And we’ve gotten results, against those really good teams. It’s not like that’s how you want to start at game. But we’ve done it before, we’ve overcome it before, so they’ve got great confidence in what they can do.”

Marquette was quick to counter, which came as no surprise to Explorers senior Nick LaFata

“Right off the rip, I knew we could come back,” LaFata said. “From there, I had no doubt in my guys that we would come back and get one.”

It was more gift than get. Luke Atkinson’s shot that was harmlessly bouncing toward Columbia’s goal seemed to pose no threat, but Eagles keeper Alec Venhaus whiffed on his kick and the ball rolled in for a goal to tie it at 1-1 just 3:40 in.

“We got a break,” Gould conceded. “I think their first goal, they got a break, too. If we look at it, we would have really rather have been able to clear the ball a little better than we did.”

After those two misplays, the Explorers owned much of the play with a light wind at their back in the first half. Marquette broke through when LaFata split the Eagles defense with a feed to Noah McClintock, whose leg injury did not keep him from beating Columbia defenders to the ball and beating Venhaus one-on-one to put the Explorers up 2-1 with 8:14 left in the half.

“It was a great ball in,” McClintock said. “My leg isn’t the best right now, but it was good enough to get the ball in. That’s all that mattered.”

The goal was the 18th of the season for McClintock and the assist was the 16th for LaFata.

“Noah’s got something with his knee right now, so he’s not 100 percent,” LaFata said. “But I’ve got faith in all my guys, no matter what. You can put Aaron (Boulch) on the field with a torn meniscus and I promise you I’ll still have as much faith in him as anybody else.”

Boulch, Marquette’s leading scorer with 20 goals, was out, but the Explorers had all the offense they needed with goalie Joe Guehlstorf and Marquette’s defense repelling the desperate Eagles under a light rain in the second half.

Columbia’s best chance to draw even midway through the second half when Guehlstorf stopped a shot from Jonah James and Rand Mathews’ rebound opportunity into an open net was denied when Marquette’s Justin Atkinson was able to clear.

James came in with 28 goals and Karon Bridges had 17, but they were neutralized by Marquette.

“They’ve got two really dynamic kids,” Gould said. “One normally plays in the midfield, one normally plays up top. They put them both up top, knowing they had to score. And that put us under a lot more pressure than the first half. That was a big deal.”

To read more, check out the article online STLToday.
https://www.thetelegraph.com/sports/article/BOYS-1A-SOCCER-SUPER-SECTIONAL-Marquette-downs-14573126.php Source: The Telegraph