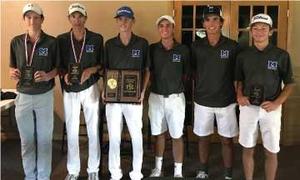 The regular season comes to a close with a championship plaque and three golfers advancing to the sectional tournament on October 14th. The Marquette Catholic Explorers finished the regular season in fine fashion on Friday, winning the Prairie State Conference championship. They followed that up by advancing 3 golfers out of the Class 1A Marquette Regional at Spencer T. Olin Golf Course on Monday.

The Explorers fired a 334 at the PSC Tournament at Timber Lakes Golf Course in Staunton on Friday, winning the event by 46 strokes. Junior Williams Roderfeld paced the attack with a 76 to earn medalist honors on Friday. He followed that up with another 76 Monday during the regional, leading Marquette again and finishing fifth overall to secure another medal. He advanced to the Zeigler-Royalton Sectional on Oct. 14 at Franklin County Country Club in West Frankfort.

Roderfeld will be joined at the sectional by freshmen Aiden O’Keefe (83) and William Schwartz (92) after their finishes on Monday.

At the PSC Tournament, joining Roderfeld in the team scoring were, O’Keefe (81), Schwartz (88) and Nick Wooden (89). O’Keefe and Schwartz also earned medals at the conference tourney, as the top 5 linksters earned hardware.

On Monday at regionals, the Explorers missed the cut as a team by 2 strokes, carding a 349. Hillsboro won with a 310, with Althoff (317) and Gibault (347) getting at-large bids finishing second and third respectively. Grant Heinz (98) joined Roderfeld, O’Keefe and Schwartz as scorers for Marquette on Monday.