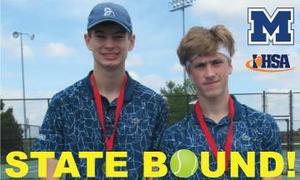 Victory at the Triad Class 1A Sectional Tournament secures a trip to Chicago for MCHS's #1 Doubles team. Marquette ended the season with a 3rd place team victory the Traid Sectionals. The IHSA State tournament begins May 23rd in Chicago. TROY — The Marquette Catholic High doubles team of Daniel McClusky and AJ Bower is heading back to the IHSA State Tournament.

McClusky and Bower Friday defeated Wyatt Freand and Will Roberts of Jersey 6-0, 6-0 for the title at the Triad Class 1A Sectional tournament. They also defeated TJ Bloom and Jared Speer of Triad 6-0, 6-2 and Cameron Woods and Sean Froidcourer of Triad 6-0, 6-1.

Jaden Henderson of Triad was the singles champion at the sectional.

As a team, Marquette finished third in the standings with 12 points. Host Triad was the team champion with 29 points, followed by Mascoutah with 16 points, Marquette, Highland 11, Jersey, Althoff and Waterloo with 1 points each, Civic Memorial four and Roxana two points.

The IHSA State tournament is set to get under way May 23 and run through May 25 at sites around the Chicago area. The tournament headquarters will be at Chicago Hersey High School.