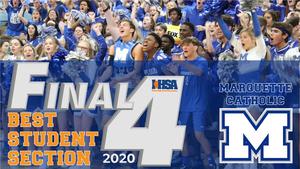 
Alton, IL - Marquette Catholic’s student cheering section, “The Blue Crew”, has for many years been a source of pride and fun for the students of Marquette.  With dozens, and often hundreds, of students cheering for the Explorers on the field or court, the Blue Crew has also been an ever-present thorn in the side of opposing teams.

Their efforts have now been recognized by the Illinois High School Association, who has chosen Marquette Catholic as one of four finalists in the IHSA Student Section Showdown.

As a finalist, representatives from Marquette will attend the 1A Boys Basketball State Finals on March 14th.  A highlight video of the four finalists will be shown and the students will be introduced during halftime of the 1A State Championship game.   The winning school will be presented with a banner by members of the IHSA Student Advisory Committee.

Schools were asked to submit a video to the IHSA highlighting their student section. The Marquette Communications class, led by Mrs. Beth DeCourcey, and senior Quinn Smith spearheaded the effort. “We are honored to have our student section be selected among the final four of high schools in Illinois” said DeCourcey. “I’m very proud of the Communications students and their efforts to achieve this recognition”.

Marquette’s Head Boys Basketball Coach Steve Medford has been a believer in The Blue Crew throughout his 10 years at MCHS. “Whether it’s a basketball game, football game, soccer game, or countless other ways, the school spirit here is off the charts” said Medford. “I’d be lying if I said it didn’t help us on the court. But more than that, it’s just a fun experience for the students. A game is much more than the kids on the court - it’s also the Dance team, the Cheerleaders, the fans and yes, all those students in the stands”.

Marquette Senior Nick LaFata is this year’s “Captain Marquette”, the leader of The Blue Crew. “Being a part of Marquette is something you can only appreciate if you are a part of it. It’s a continuous tradition that has been passed down year to year. It’s such a fun thing to be a part of and any kid would be lucky to be a part of it” LaFata said.

You can view the video by clicking here